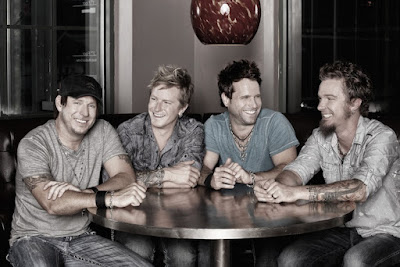 Parmalee continues its hot streak as it rounds out 2015 achieving its third consecutive Top 10 hit from the band’s debut country album, "Feels Like Carolina".

Today “Already Callin’ You Mine,” which has earned widespread praise from critics and fans alike, landed in the Top 10 on both the Billboard Country Airplay and Country Aircheck charts. Previous singles, the certified platinum, “Carolina,” and mega-smash, “Close Your Eyes,” surged to #1 and #3, respectively. No small feat, Parmalee is the first country group since The Band Perry to earn three consecutive Top 10 hits from a debut country album.
In addition to catapulting chart success, 2015 has been a banner year with many other milestones for country music’s hottest ‘band of brothers.’ Parmalee made their inaugural appearance on NBC’s TODAY Show in September and, just last month, headlined Minges Coliseum on the grounds of the band’s alma mater, East Carolina University.
Parmalee’s debut country album "FEELS LIKE CAROLINA" is available at all digital retailers now: http://geni.us/FeelsLikeCarolina
Posted by LovinLyrics at 5:40 PM