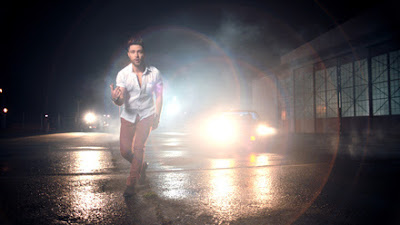 Temperatures rise and hearts-pound in the video directed by TK McKamy, which brings Lane’s “Fix” to life and shows off his classy swagger in ‘falling in love at the end of the night.’ Filmed at an airport hangar just outside of Nashville, the video features lead model Cheyenne McCann who turns the heat up dancing in a smoky silhouette. Watch the music video here: http://www.cmt.com/videos/chris-lane/1268661/fix.jhtml.

“I wanted the vibe of the video to match the sound of ‘Fix’ and I really feel we captured it. Making this video was so much fun and I can’t wait for my fans to check it out,” shared Chris Lane.

Breaking records with his lead single “Fix,” Lane accumulated the most first week single adds from a debut male artist in Country Aircheck history. Also coming in at No. 1 on Billboard’s Twitter Real-Time Emerging Artist chart, he racked up shout-outs from celebrities Brett Eldredge, Florida Georgia Line, Lucy Hale, Dustin Lynch, Cole Swindell, and more, making the song one of the most shared tracks on Twitter in the U.S. from an up-and-coming artist that day. Media have applauded the newcomer’s bold, fresh sound and standout falsetto, featuring him on Billboard.com, E! Online, Glamour.com and more.

Working with acclaimed producer Joey Moi, Lane discovered his gift for the falsetto with “Fix.” The infectious title track shaped Lane's sonic direction for his debut EP FIX and sent him on a search for songs to fit the upper register of his vocal range. The result – an addictive and danceable set of six songs, which is now available here: http://apple.co/1OGYDBS.

For tour dates and more information, visit www.iamchrislane.com.
Posted by LovinLyrics at 11:56 AM