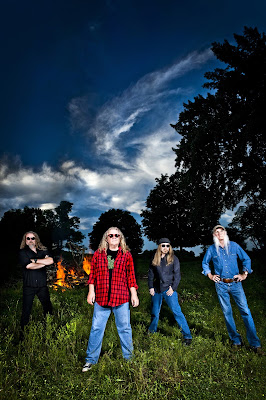 NASHVILLE, Tenn. (February 18, 2016) – Grammy® Award winning southern rock group known for top-charting hits like “Dumas Walker,” and “Walk Softly On This Heart Of Mine,” The Kentucky Headhunters, will rock the bluegrass on Monday night, February 22, in Lexington as part of “Michael Johnathon’s Woodsongs Old-Time Radio Hour.” Hailing from small-town Edmonton, Kentucky, the legendary and popular group will debut electric versions of their new music on latest album Meet Me In Bluesland, as well as their well-known hits, before an intimate 300-seat live audience at the historic Lyric Theatre. Purchase tickets to by visiting www.woodsongs.com or calling 859-252-8888.

Hosted by folksinger Michael Johnathon, “Woodsongs” is an acoustic format radio and television show broadcast on over 500 radio stations across the country including the American Forces Radio Network, and viewed in over 90 million households across the country on KET, BlueHighways TV, DISH TV and various PBS stations. A combination of music and interviews with artists of the grassroots and Americana music genres, it is a volunteer-run weekly program with a mission to inspire viewers to make music part of their daily lives and explore a variety of musical artists’ various backgrounds and genre styles.

“What ‘Woodsongs’ is doing is fantastic,” said The Kentucky Headhunters’ Richard Young. “We’re looking forward to being a part of the show on Monday and bringing our music to one of our home-state’s most historic music theatres. It’s always a great feeling to play at home in Kentucky, and to get to perform for so many viewers and listeners around the world is a real honor,” he added.

Known as “Southern Rock Royalty” and dubbed the “great American rock ‘n’ roll band,” by Rolling Stone, The Kentucky Headhunters have maintained a career longevity most acts can only dream about. With a Grammy® Award, CMA Album of the Year Award, two CMA Vocal Group of the Year Awards, two Top 10 charting albums, and four consecutive Top 40 hits to their name, the so-called “Heads” are credited for creating a unique blend of honky-tonk, blues, and southern rock that appeals to the toughest music critics and listeners of all kinds.

Their first album, Pickin’ On Nashville, (1989), surprised the world when it became a major success, selling over two million copies and producing stand-out this like “Dumas Walker” and “Walk Softly On This Heart Of Mine,” among others. The band was also awarded a CMA Award for “Producer Of The Year” for their work on Pickin’ On Nashville – a rare distinction for artists who produce their own albums.

The group’s newest album Meet Me in Bluesland, hit stores on June 2, 2015 and includes the last vocals ever recorded of the late keyboardist Johnnie Johnson — a Rock N Roll Hall of Famer and famed player for Chuck Berry. Meet Me In Bluesland reached the No. 1 spot on the Billboard Blues Album chart the week of its debut. It also garnered top placement on the Billboard Americana Chart. Yahoo! Music hailed, “The album is a rocking joy through and through, an unexpected romp that’s as good to hear as it must have been to perform.”