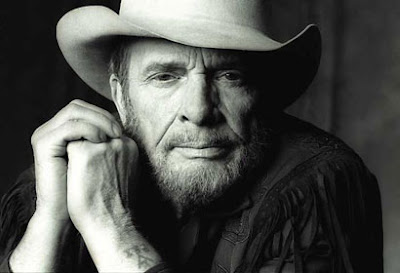 Today, the Lord met Merle Haggard. Oh He's talked to him many times I'm sure, but with the passing of the legend this morning, the angels of country music heaven are singing and welcoming Merle with open arms.

Merle was so more than just a voice of song, he was a voice for the working man, a voice of simplicity and voice of the hearts of many. He sang about what he knew, the struggles of life, both struggles inside of himself and struggles in the outside world. He sang of what's honest. He put his life to words and told his story many times over, the way only he could tell it. He wasn't just a teller of stories, he was an example of stories of life. Merle Haggard embodied what country music is about and never strayed from that. he respected the genre, it's fans, it's past and it's present. He was such a huge presence, not only in the industry but in the every day life of the genre itself. People wanted to see him and listen to him, artists wanted to be him. The problem with that is that there was only one Merle and no matter how hard anyone tried, there would always only be one Merle. We all wanted to meet "The Hag", just once, to shake his hand and tell him how much he brought to country music and how he affected our lives as country music fans and many of us did get to meet him and do just that. Many of us won't get that chance because today, one of country's biggest and brightest lights went dark.

Today, the Lord met Merle Haggard and I can promise you He didn't have to ask "Why should I let you in?". He just opened the gates and Merle took his place next to Johnny Cash, Patsy Cline, Hank Williams, Waylon and so many that went before. Man I bet there is an awesome jam session going on in heaven today.

I am not sure that thank you is enough, but it's all I can manage to utter right now and trust me when I say that those two words, no matter how small, have a huge appreciation behind them.

Rest in peace to country's favorite Okie From Muskogee and Happy Birthday.

Love,
Jenn and a country music nation in mourning

Posted by LovinLyrics at 3:56 PM

Thank you Jenn for putting into words what many of us are thinking. Rest In Peace Merle Haggard, we lost a true legend today. I definitely agree with you Jenn, there is one awesome jam session going on today in heaven and that definitely makes me smile.