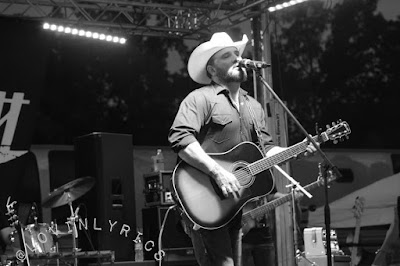 When Ray Scott is coming to town, you know it's gonna be a good time but when he's coming to HIS hometown area, you know the bar just got raised a whole lot higher. Ray performed for friends, family and quite a few drunk friendly strangers this past weekend in Roxboro, NC and man was it hot and I'm not just talking about the sweltering heat. The women love Ray and honestly, I think some of the men may have had a manly man crush going on to. That's because Ray has this certain country "swaggertude" that people just love. Fans love that he is unapologetically Ray and he is who he is. He's the kind of guy you can drink a beer or twelve with and feel like you just sat down with a lifelong friend.

The show was held outside and it was a typical NC summer day, full of boob sweat, swamp crotch and melted makeup before you even got from the parking lot to the performance area. I definitely looked and felt like I'd gone a few rounds with Mike Tyson or either mated with a raccoon by the way my mascara had melted around my eyes but it was more than worth it for the show I was about to see.

There were two great opening acts, the Rock City Rollers who did an outstanding job of covering some classic rock hits and I gotta say, the young guitar player, Adam Snow (I think that was his name) was one of the best guitar players I've ever seen hands down. He had great vocals too. He broke out a version of Ed Sheeran's "Thinking Out Loud" that damn near rivaled the original on quality. What a great set these guys put on.

Next up was local artist, Matt Boswell and the Hillbilly Blues Band. Matt was pretty impressive as well, great vocals and very entertaining to watch. I immediately downloaded his singles, "My Way of Life" and "Working Mans Prayer" on iTunes.

Even though the weather was questionable with severe thunderstorms forecast and lighting streaking across the sky in the distance, this didn't deter real country fans from sitting and enjoying a night of great music. Ray took the stage about 9pm and had a HUGE set list over more than 20 songs. Sadly, I only got to see about half of the show since the weather was getting bad in the direction I had to go but it was still a hell of a show. Ray is one of country's best and confusingly most underrated storytellers. He can tell a story better than Uncle Seuss ever could and that's what his songs are, stories. They're stories about life, probably about personal experiences if you know Ray, they're locker room stories set to music and they're stories that the every day man can relate to. You won't hear drum machines, auto tuner or overplayed screeching electric guitar during his show. What you will hear is simple yet undeniable country music that makes an impression. With his deep rich vocals and an amazing band made up of some of the best in the business, any Ray Scott show is more than worth your time, the drive and the ticket price. I'm glad I made the 4 hour drive for this one and I'd do it again. This time the drive lead me down the "high road" to one of the best shows I've ever seen.