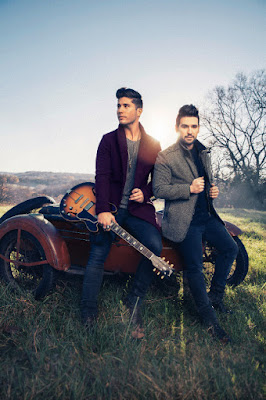 Platinum-selling country duo Dan + Shay (Dan Smyers and Shay Mooney) are continuing the celebration of the release of their new album, Obsessed, with a performance on The Ellen DeGeneres Show on Friday, June 17.

The breakout stars will perform “From the Ground Up,” the lead single from Obsessed. Written by Dan + Shay alongside Chris DeStefano and co-produced by Smyers and Scott Hendricks, the song is currently Top 20 and climbing the Country charts, has remained in the top ten Country Songs on iTunes since it’s release, and has been Top 10 on the Shazam country chart for nine consecutive weeks.

Known for their social media engagement, Dan + Shay have also released special companion videos for many of the 10 tracks from Obsessed. Beginning with the reveal of “Already Ready” as part of their Facebook “Artist of the Day Feature,” the duo subsequently released videos for “Road Trippin’,” and “How Not To” as well as the title track, “Obsessed.” The name for the song and ultimately the album was directly inspired by fans, who posted the hashtag “#obsessed” all over social media upon the release of “From the Ground Up.”

Dan + Shay are currently touring on Darius Rucker’s Good for a Good Time Tour. For more information and tour dates, please visit DanAndShay.com and follow @DanandShay on Twitter and Instagram.

Posted by LovinLyrics at 5:28 PM