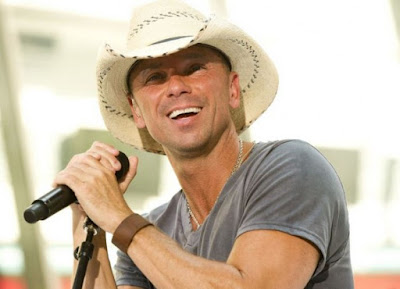 NEW YORK, N.Y. (Thursday, July 7, 2016) - If it’s summer, it must be time for Kenny Chesney to Spread the Love across America’s breakfast tables -- as he teams with his friends at ABC’s Good Morning America. This Friday (7/8), Chesney will take the stage in Central Park as part of GMA’s annual Summer Concert Series.

“If there’s one thing that seems like summer – as much as our hitting the road, getting out there to the No Shoes Nation—it’s being a part of Good Morning America’s concert series in Central Park,” says the man The Los Angeles Times called “The People’s Superstar” of his upcoming appearance. “Taking the music outside is what it’s all about – and there is something about the Park that just feels like everything the music I’ve been making is all about.”

For Chesney, whose “Noise” is cresting the Top 5 this week, music has been a way to celebrate the elation of being alive. Whether the freewheeling spirit of “American Kids,” the coming of age surge of “Young,” the beauty of women coming into their own in “Wild Child” or the uplifting sweep of “Save It For A Rainy Day,” the 4-time consecutive Academy of Country Music and 4-time Country Music Association Entertainer of the Year understands using music to create a bond with people who’re consumed by living their lives.

With Some Town Somewhere moving to Oct. 28 including “Setting The World On Fire,” a special duet with P!NK, the man who scored four consecutive No. 1’s off The Big Revival continues taking his music to the No Shoes Nation with his 14-date stadium Spread The Love Tour. Heading into the halfway mark, Chesney will play Darling’s Waterfront Pavilion in Bangor, Maine then headline the Cavendish Beach Music Festival on Prince Edward Island this weekend.

“Music is medicine,” Chesney says. “It does so much good for people. You can find your life, your truth and yes, your fun in it. That’s one of the things that drew me to music, and it’s one of the best things about being out on the road: seeing all the people, hearing them sing and cheer – and you can tell how much fun they’re having. The fact music can do that, well, that’s part of why playing Good Morning America is such a great thing: get people’s day off to a great start, and let them take that music with them.”