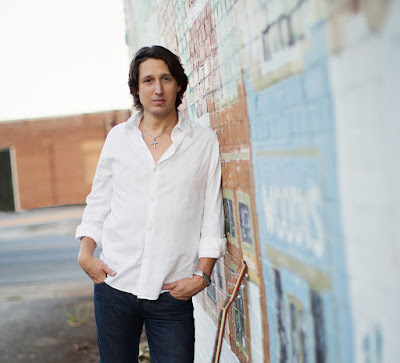 Singer/songwriter Lee Gibson gave an intimate acoustic performance last night at the Trent River Coffee Company, located in the historic eastern North Carolina town of New Bern. If you've never been to eastern coastal North Carolina, it's a trip you should add to your bucket list. With it's beautiful coastline, scenic rivers and rich history, it's a must see for any traveler. New Bern, just about a 40 minute drive from Morehead City and Atlantic Beach, is the birthplace of Pepsi Cola, a former filming location for the television hit series, "Sleepy Hollow", the Tryon Palace and just walking down the streets, you can feel and see the history of this place. It's absolutely gorgeous. The Trent River Coffee Company is situated right in the middle of downtown New Bern, in an old, quaint brick building adjacent to the old City Hall building.

Lee Gibson is a Nashville based singer/songwriter with a love of classic twang and a respect for the fact that country music is evolving and his music is the perfect evolutionary transition. Having released 2 previous projects that include songs such as "Tennessee Rain", "Still Here" and "Long Slow Night" that received positive reviews with industry professionals, online music bloggers and fans alike, Lee is currently working on his next release which should be announced soon.

Last night's show was very personal with just Lee, his guitar and a room of a handful of friends, family and coffee shop patrons, but the cool thing about Lee is that it doesn't matter if he's playing a show at the Wildhorse Saloon in Nashville or to a smaller venue such as the coffee shop, his enthusiasm, energy and effort remains consistent and he brings any size venue and crowd to life.

He performed originals and a few carefully selected songs by some of his favorite writers and songs that have personal meaning to him. I loved the set list, it wasn't your typical hodge podge of random stuff thrown together 20 minutes before the show, it was thought out and tuned towards the type of audience he was performing in front of. Songs included "It's Not Easy Being Me", "Don't Judge Me", "Tennessee Rain", "Long Slow Night", "Still Here", "Don't Ask Me How I Know" (cover of one of my favorites, a great song by Bobby Pinson), a fantastic rendition of the classic Dan Seals hit "Everything That Glitters is not Gold", "Impossible to Do" which is a great song by Anthony Smith, a hilarious performance of "Bake Me a Country Ham" a spoof of Tracy Lawrence's "Paint Me A Birmingham" written by Lee and Corey Barker which was hit for Cletus T. Judd, a rockin' cover of the Elvis Presley hit "Suspicious Minds" among others. Even though his set included many covers of songs by other artists, Lee is an amazing songwriter in his own right and proved why with this show.

The audience loved the set, sang along, laughed, and had a great time. Well worth my 45 minute drive. Lee tours nationwide and I highly recommend taking the time to catch a show if he's in your area. He made me remember why I love songwriters and acoustic shows. Thanks Lee!

Purchase Lee's music on iTunes at https://itun.es/us/OJsx or on his website.
Posted by LovinLyrics at 8:24 PM