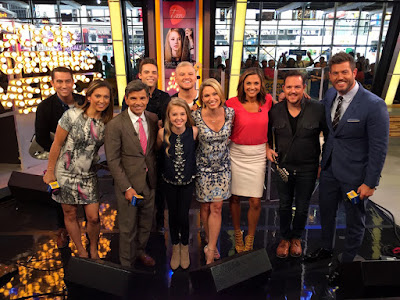 Country darling Tegan Marie made her first major television debut on ABC’s Good Morning America today (8/29), while serving up a bubbly performance of her current single “Lucky Me.”

The little girl with a big voice is wowing listeners with her jaw-dropping vocals at just 12 years old. She’s also making a big difference in her community, as the Flint, MI native is continuing to donate 100% of the proceeds from “Lucky Me” to the children in her hometown directly affected by the devastating water crisis.

Stealing hearts worldwide, the viral sensation charmed GMA’s live studio audience while also singing her impassioned rendition of Florida Georgia Line’s #1 smash-hit “H.O.L.Y.” Within three weeks of posting a cover of it on Facebook earlier this summer, it garnered over 15 million views, made FGL “misty-eyed,” and was featured in Us Weekly’s “Buzzzz-o-Meter” column.

A young star on the rise, Tegan has been incredibly well-received by critics. Country Rebel noted, “At only 12-years-old, Tegan Marie is proving that she could not only be the next young star in country music, but the next big star period.” RARE Country added, “If you remember the shock we all felt when a 13-year-old LeAnn Rimes first hit the country scene with ‘Blue’ back in the mid-‘90s, then you’ll appreciate how rare a talent we’ve got in Tegan.”

Her exceptional talent also recently caught the attention of the U.S. Women’s Soccer Team as they invited her to perform the national anthem at their last home game before the Olympics. Tegan rose to the occasion and didn’t let her home team down. RARE Country hailed, “The national anthem is considered by many singers to be one of the hardest songs to perform, but it was a piece of cake for Tegan.”

Posted by LovinLyrics at 4:43 PM