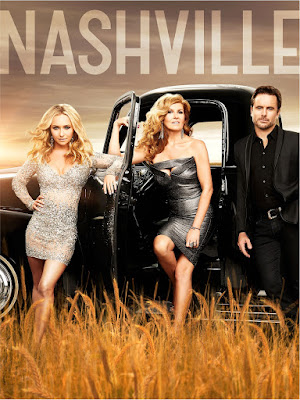 AXS TV is going country, premiering the fourth season of the popular music drama NASHVILLE on Saturday, October 1, at 9:00PM ET / 6:00PM PT. The network will air back-to-back episodes every Saturday night at 9:00PM ET and 10:00PM ET, with encores following immediately after. AXS TV is the exclusive broadcast home to the first four seasons of this Emmy®-nominated production.

Kicking off the festivities on October 1 is a NASHVILLE Marathon, starting at 3:30PM ET with a special NASHVILLE encore edition of THE BIG INTERVIEW, following host Dan Rather as he tours some of the series’ most iconic sets, and speaks with stars Connie Britton and Charles Esten about their careers, personal lives, and their roles on the show. Then, stay tuned to watch the last five episodes of NASHVILLE’s season three at 4pE, leading up to the first two episodes of season four at 9pE and 10pE. The first two episodes of the fourth season will immediately encore after their premieres.

“AXS TV is proud to be the broadcast home of season four of NASHVILLE,” said Michele M. Dix, AXS TV’s senior vice president, programming and development. “Packed with unprecedented guest appearances, standout musical numbers, and captivating drama, it’s easy to see why this series has resonated so much with its viewers. This is a perfect chance for fans both old and new to relive all the intensity of NASHVILLE’s climactic fourth season.”

Produced by Lionsgate, ABC Studios, and Opry Entertainment, NASHVILLE is set against the backdrop of the city's music scene and follows Rayna Jaymes and Juliette Barnes. Both women face personal and professional challenges as they navigate their paths as artists and individuals. Surrounding them and often complicating their lives are their family, friends and, in some cases, lovers, as well as the up-and-coming performers and songwriters trying to get ahead in the business. Music City can mean so many things to different people. In NASHVILLE, musicians and songwriters are at the heart of the storm driven by their own ambitions. Some are fueled by their creativity and passion for fame. Others struggle to cope with the pressures of success and are doing everything in their power to stay on top.

In addition to its dramatic plots and unforgettable performances, NASHVILLE has featured a number of impressive guest appearances from some of the biggest names in entertainment, including Florida Georgia Line, Carrie Underwood, Kelly Clarkson, Brad Paisley, Luke Bryan, Katie Couric, and Conan O’Brien, just to name a few.
Posted by LovinLyrics at 3:51 PM