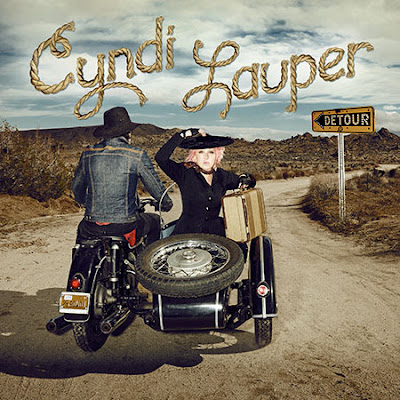 Just as Pokemen has taken social media by storm, fans are encouraged to capture photos of their #cyndiDETOUR copy in Cracker Barrel Old Country Store® locations and post their picture for a chance to win a limited edition autographed DETOUR vinyl record.

Known best for her legendary pop icon status, Lauper is reigning in a new legion of fans with her new country-tinged album DETOUR featuring a collection of country covers from the 40’s, 50’s and 60’s (track listing below). DETOUR, which debuted No. 4 on the Billboard Top Country Albums chart, features duets with several special guests, including Emmylou Harris, Willie Nelson, Vince Gill and Alison Krauss.

Lauper just returned from the European leg of her DETOUR tour after performing in 19 U.S cities (tour dates below). The 16-city second leg will return Sept. 10 at Austin’s ACL Live and traverse the west coast before wrapping up October 8 at the The Joint in Las Vegas. CLICK HERE to purchase tickets before this highly anticipated tour sells out in your area!

"These songs had a profound impact on me when I was a little girl listening to my Aunt Gracie's kitchen radio in Queens. I grew up listening and admiring Patsy Cline, Patsy Montana, Hank Williams - all the greats from the Golden Age of country. It was an honor to record those beautiful songs for DETOUR and I am so thankful for the fans and the country music community for welcoming me with open arms," Lauper said.

Critics are raving about the pop star’s unique approach: