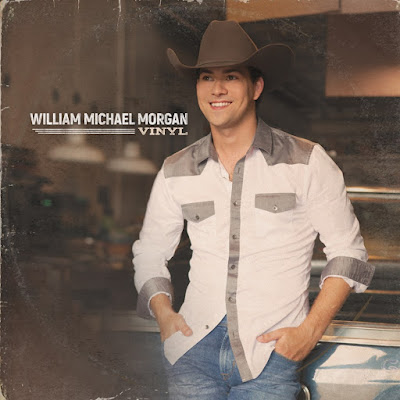 Times are changin' and so is the direction of country music thanks to artists like William Michael Morgan. His Sam Hunt penned debut single, "I Met A Girl", put the country music charts on a new tilt and went all the way to #1 after 49 weeks, setting a Mediabase chart record for longest climb to number one. It may have taken awhile to find it's way to the top of the charts, but it sure didn't take long to find it's way to the #1 place in the hearts of traditional country music fans, Now, with the release of his much anticipated debut album "Vinyl", fans have even more reason to be excited. It takes a special kind of artist to start a fire and William Michael Morgan seems to be just the spark that's needed.

Each track on the album reflects who William Michael Morgan is, honest and simple with a deep love for the style of country music that seems to have gotten lost somewhere along the way but that so many of us have held on, waiting for it to find it's way again. He isn't just looking the part with his cowboy hat and Wranglers, he IS the part. His voice is pure and smooth with a hint of Strait that will make your belt buckle. What a refreshing thing to hear when you turn on the radio. Yes, I said radio because even they've seen that what he has to give is much needed. Thank you to all of the stations who took a chance and added the single to their playlists. I promise you that your listeners appreciate it. Even today's younger demographic is pleased in two ways, "I Met a Girl" is a well written song by one of pop country's most popular artists, Sam Hunt, and a well sung song by one of country's hottest traditional newcomers, Morgan. It appeals across the dial.

This is a CD that should be purchased in it's entirety and not limited to the purchase of one or two individual tracks because every track delivers. With songs written by some of country's best writers including, in addition to Sam Hunt, Rhett Akins, Trent Tomlinson, Casey Beathard and Kevin Denney, you really can't go wrong. There is no wrong on this CD, nothing that honest critics can give a thumbs down to. There will be more hits on the way from this album, I'd bet the ranch on it. William Michael Morgan has proven he has more than just potential as a bonafide country artist, he's cemented his future in the genre.

"Vinyl" is available on iTunes, Amazon, Spotify and Walmart.