COAT OF MANY COLORS
By Dolly Parton 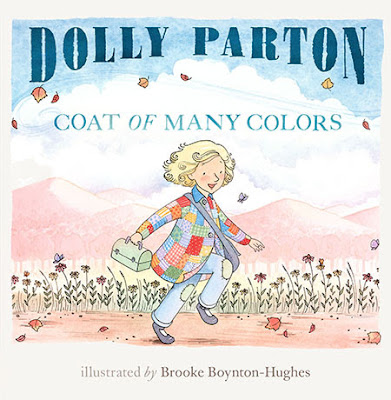 Using lyrics from her classic song "Coat of Many Colors," and inspired by Parton’s rural upbringing in the Smoky Mountains of Tennessee, the picture book tells the story of a young girl in need of a warm winter coat. When her mother sews her a coat made of rags, the girl is mocked by classmates for being poor. But Parton's trademark positivity carries through to the end as the girl realizes that her coat was made with love "in every stitch."

Francesco Sedita, President and Publisher, Grosset & Dunlap, said, “As someone who grew up listening to Dolly Parton with my family, having this very special opportunity to work on the Coat of Many Colors picture book has been a lifelong dream come true. The book—and the song, of course—really speaks to how important family and community is. And how vital it is to respect those around us and to be grateful for what we have. I believe this book is one that will be passed down for generations to come.”

Coat of Many Colors is the latest project in Dolly Parton’s longtime mission to support childhood literacy. In 1988, she began the Dollywood Foundation to inspire children in her home community to dream more, learn more, care more, and be more. The Foundation’s signature program is the Dolly Parton Imagination Library which works with local sponsors to give every preschool child a book each month from the time he or she is born until the child reaches kindergarten. The Imagination Library has gifted over 80 million books in the United States, Canada, United Kingdom and Australia.

Following the publication of Coat of Many Colors, NBC will air the sequel to last year’s TV movie “Coat of Many Colors.” In “Dolly Parton’s Christmas of Many Colors: Circle of Love,” the Partons, a family of humble means living in the mountains of Tennessee, face a devastating event that challenges their will. But when they experience a bewildering Christmas miracle, the Partons are drawn closer together than ever—with deepened faith and love for one another.

An internationally renowned superstar, the iconic and irrepressible Dolly Parton has contributed countless treasures to the world of music entertainment, penning classic songs such as "Jolene," "Coat of Many Colors," and her mega-hit "I Will Always Love You." She has garnered 7 Grammy Awards, 10 Country Music Association Awards, 5 Academy of Country Music Awards, 3 American Music Awards, and is one of only five female artists to win the Country Music Association's Entertainer of the Year Award. Dolly Parton is an instantly recognizable American icon. She is a Grammy Lifetime Achievement Award Winner, a Kennedy Center Honors recipient, and was inducted into the Country Music Hall of Fame.

This June, Dolly Parton embarked on her first tour in 25 years. Her "Pure & Simple" tour will travel to 60 cities in North America in 2016.

Brooke Boynton-Hughes is an artist and illustrator originally from Loveland, Colorado. She received her BFA in Printmaking from Colorado State University and her MFA in Figurative Art from the New York Academy of Art. Brooke works on children's books and travels around the country with her husband, Bill, and their dog, Olive.

Penguin Random House (http://global.penguinrandomhouse.com/) is the world’s most global trade book publisher. It was formed on July 1, 2013, upon the completion of an agreement between Bertelsmann and Pearson to merge their respective trade publishing companies, Random House and Penguin, with the parent companies owning 53% and 47%, respectively. Penguin Random House comprises the adult and children’s fiction and nonfiction print and digital trade book publishing businesses of Penguin and Random House in the U.S., U.K., Canada, Australia, New Zealand, India and South Africa, and Penguin’s trade publishing activity in Asia and Brazil; DK worldwide; and Penguin Random House Grupo Editorial’s Spanish-language companies in Spain, Mexico, Argentina, Uruguay, Colombia, and Chile. Penguin Random House employs more than 10,000 people globally across almost 250 editorially and creatively independent imprints and publishing houses that collectively publish more than 15,000 new titles annually. Its publishing lists include more than 70 Nobel Prize laureates and hundreds of the world’s most widely read authors.
Posted by LovinLyrics at 1:46 PM