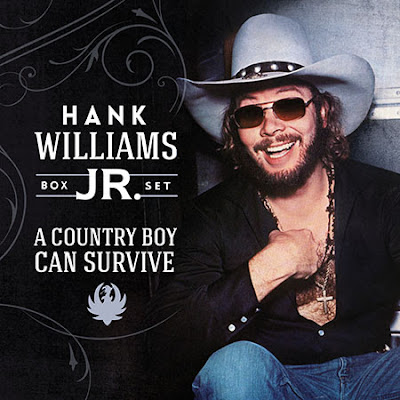 Since he made his Billboard chart debut in 1964, Hank Williams, Jr. has amassed one of the most prolific catalogs in the history of the music business. On October 21st, Curb Records will celebrate that legacy with the release of Hank Williams, Jr: A Country Boy Can Survive, a four-disc box set that stands as one of the most comprehensive Williams sets ever released.

Focusing on his superstar era that kicked off with 1979’s “Family Tradition,” twenty-nine of his thirty Billboard Top-40 Country hits from 1979-1990 are featured on the collection, which also includes nine of his ten number one hits (including his first 1970’s “All For The Love Of Sunshine,” with The Mike Curb Congregation.) The set also contains fan-favorite album cuts, such as ‘”Outlaw Women,” “Dinosaur,” “The Blues Man” and concert favorite “My Name Is Bocephus,” which originally appeared on his million-selling 1986 set Montana Café. The fourth disc of A Country Boy Can Survive focuses on Williams’ legendary live show, including performances of such classics as “I’m For Love” and “If Heaven Ain’t A Lot Like Dixie,” as well as the iconic title cut – which will celebrate its’ thirty-fifth anniversary in 2017.

Williams’ run with Curb remains one of the most successful recording affiliations in Country Music history. Beginning with 1977’s One Night Stands, the singer charted thirty-seven albums with the label, selling well over seventy million albums worldwide, with fifteen of his albums being certified Gold and eight Platinum. In 1982, the singer earned the distinction of becoming the only artist to simultaneously have nine albums on the Billboard Country Albums chart at one time. He was also one of the most-awarded artists of his time, winning a trio of Entertainer of the Year trophies from the ACM, as well as back-to-back honors from the CMA in 1987 and 1988. His collaboration with his late father, “There’s A Tear In My Beer,” (included on the set) won a Grammy, as well as several other honors in 1989 and 1990.

The release comes as “Bocephus” continues to experience a career resurgence. His latest Nash Icon album, It’s About Time, opened up on the Billboard Country Albums chart at No. 2 – his highest peak on that chart 1990’s Lone Wolf. The album features “Are You Ready For The Country,” a cover of the Neil Young classic with Eric Church that brought Williams his highest singles chart position since 2009. He has also played to sold-out show after another this year – both by himself, as well as with critically-acclaimed singer-songwriter Chris Stapleton.

Born To Boogie
Heaven Can't Be Found
Young Country
If The South Woulda Won
My Name Is Bocephus
Early In The Morning And Late At Night
There's A Tear In My Bear (w/ Hank Williams)
All My Rowdy Friends Are Coming Over For Monday Night Football
Finders Are Keepers
Ain't Nobody's Business
Good Friends, Good Whiskey, Good Lovin'
Hog Wild
America Will Survive
A Country Boy Can Survive (Remix)
Red, White & Pink Slip Blues
All For The Love Of Sunshine (w/ Mike Curb Congregation)