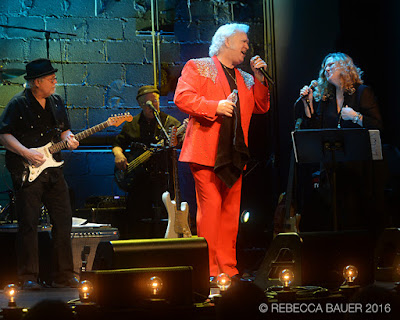 I absolutely love any chance I get to talk to T. Graham Brown and how can you not, he's so much fun and so personable. Anyone who asks "how's your mama" right off the bat is tops in my book but then again, T's always been tops in my book. He's one of those artists that just carves out a special place in the heart of anyone who is blessed to connect with him.

This year marks the release of T.Graham's first ever Christmas CD, "Christmas with T.Graham Brown". The CD is full of Christmas favorites as well as a couple of new ones, "Santa Claus is Coming in a UFO" which is an example of the crazy sense of humor TGB is loved for and "Mary Had a Little Lamb", a poignant tune co-written with Jimmy Fortune of the Statler Brothers and T. Graham's wife, Sheila Brown. All the bases are covered on this one which is expected as T. Graham Brown always hits a grand slam when it comes to his music.

Having known T personally for awhile, our "quick chat" turned into an hour of stories, laughter, jokes, discussion about the CD and of course, Andy Griffith trivia. I don't call chats with this guy "interviews", I call them "good times" because that's exactly what they are and they're times I hold close and cherish, just like I do my friendship with TGB and Sheila. They're the best. Here's just a small bit of our conversation, a little random, which is how our conversations go and there was more that stayed just between us. Life with TGB is always a random conversation that sticks with you and you don't forget.

Jenn: Hey darlin. How are ya?

Jenn: My life is good, real good and my mama's good.

TGB: Good, I'm so glad to hear that. I really appreciate your sweet tweets. I do read them ya know.

Jenn: Speaking of mom, she's dying to see you. When are ya coming back my way?

Jenn: (Laughs), you're killing me Smalls.

TGB: (Laughs) .. We holler at each other around this house, not mad, just hollering. (I hear Sheila in the background .. "Tell her we'll be her way this year!" I just love the relationship between these two.). Sheila said we'll get to ya this year. Hug your mama for me and tell her I said Merry Christmas.

Jenn: Good, it's past time. It's already been a year since I hugged your necks and that ain't right at all.

Jenn: So speaking of Christmas, you've been busy.

TGB: Yeah, they've been keeping me busy with this new Christmas album and we did the Opry last week. Did you know we've played the Opry 200 times? Whew! That's a lot isn't it? It's nothing compared to people like Connie Smith who have played it more than that through the years but it sure is a lot and I've loved every time I've done it.

Jenn: So tell me about your new Christmas CD. What's the story on that? What made you decide to finally release a Christmas album?

TGB: Well, Sheila's been after me for about 30 years I guess but what really did it though was when we put out Forever Changed and Sony started distributing it and Cracker Barrel put it on all the stores, it sold well enough that they asked me to do a Christmas album so I finally said yes. We went in and put it together, I wish we'd had more time to put it together but it turned out to be one of the best things I ever did.

Jenn: If every artist had the time they wanted to work on albums, we'd never get to hear anything because it would never be perfect.

TGB; That's a good way to look at it. When you're producing a record, especially producing for yourself, that's one of the hardest things to do, know when to say when. As a singer, you'll be sitting there going, "Hey, I can beat that, I can do better than that." and drive yourself crazy. It's like a painter, you have to know when to put your brush down. But anyway, about the Christmas CD, it's got all the standard fare with a couple of ... um .. well ... "Santa Claus is Coming in a UFO" and "Mary Had a Little Lamb", but the rest of it's familiar .. what's the old saying? Familiar as an old pair of shoes? Nah. How about familiar as a worn out pair of slippers?

Jenn: You turn it on and slide right into the comfort of the music. Sitting by the fire, snow falling outside and listening to "Christmas with T.Graham Brown". Yeah, I'm good with that. I'm cozy just thinking about it.

TGB; That's it. Now that's it. We were talking about trying to make something perfect? Most people don't know the difference really so you beat yourself up in the studio and no one's that buys it is gonna put it under a microscope, they just know they like it and it makes them feel good. That's all I really want from my music, to make people feel good and smile. If it makes them smile, mission accomplished. You know what the truth is? I have the best job in the world. I get to make people happy for a living. That's the way I look at it. That's my job and I have the best job in the world.

Jenn: Well you're good at it. You always put a smile on my face and the face of so many other people that listen to your music. Thank you. So do you have any other projects going on that you can talk about? New music? Tour dates? Super secret special things that you wanna spill?

TGB: Well ... I sure hope we can get out there to see you. Hmm, yes, I have some things going on but nothing I can talk about just yet but you know I'll let you know as soon as I get the go ahead to spill the beans.

Jenn: I can't wait to hear about it! So, I hear there's a story behind "Run Run Rudolph" on the Christmas CD. What's the deal with that?

TGB: There wasn't really a story behind it per se, we had a few minutes of studio time left and I said "Hey! Why don't we do this one. I found it on Youtube." We knocked it out pretty quickly and it came out great. It was kinda of an after thought that turned out to be a pretty cool addition to the CD.  It's Chuck Berry,  we had to do it. Speaking of great songs on the CD, there's one called "Mary Had a Little Lamb" that Sheila and I wrote with Jimmy Fortune. I'm pretty proud of that one too. I'm proud of the entire CD.

Jenn: So where can people find the CD? I know you can pick it up in the Cracker Barrel store, is there anywhere else or is that the only place?

TGB: Cracker Barrell has the physical CD, but if ya like the digital stuff, you can get it online at iTunes and Amazon, those kinda places.

Jenn: You know before we get off this call, you gotta give me some Andy Griffith trivia that few people would know. Any TGB fan knows you're an encyclopedia of Mayberry facts.

TGB: Hmmm, alright, let me think ... alright, when the Darlings, you know the Darlings, the family that played bluegrass, right? The first time the Darlings came to Mayberry, Andy looked out and saw they were playing some music and noticed them. Briscoe Darling, Denver Pyle, took off his hat and was scooping up water because their car had broken down. He's getting hatfuls of water and pouring it into the radiator. Andy goes out and tells him that he can't dip his hat in that water trough. He tells Andy "she's half mad with thirst" and she takes 11 hatfuls. Now there's one trivia bit right there, how many hatfuls of water does it take to fill the radiator in the Darlings' car? Eleven. It takes eleven hatfuls. THEN ... now Andy said he couldn't do that because it was for horses only, it was the David Mendelbright Memorial horse trough. Nobody knows that! Denver Pyle comes back with the response that there ain't a horse in sight. (laughs). The name of the horse trough is another trivia bit, but the real thing few people probably know is what the saying is underneath the words "David Mendelbright Memorial Horse Trough". What is the saying? Do you know? I'm asking you.

Jenn: I have no clue. None. Not one. Really nada.

TGB: (laughs) ... let no horse go thirsty. So 11 hatfuls and if that ain't weedy enough for you, the David Mendelbright Memorial Horse Trough gets even weedier, but the weediest trivia bit of all of it is "let no horse go thirsty". Ha! Ha! Who would know that? The guy who sits there and keeps pausing his dvd and checking it in slow motion about 20 times, that's who. Ha! So there's your Andy Griffith knowledge for this time. Only a crazy guy like me would know this. LOL! I love that show.

Jenn: Well it's been so good talking to you. I always do enjoy time with you.

TGB: I enjoy talking to you too. We should do it more often. Hey, did you know Sheila and I have been married 36 years today?

TGB: She's in the kitchen cooking up some beef stroganoff, hear the plates rattling? Hold on a sec ... (yells) ... "Hey Sheila! Jenn said happy anniversary!". She said thank you. Wow! 36 years. She also just told me I need to come fix my plate so I'm gonna go because I'm hungry.

Jenn: Well congratulations again. You're a lucky man and Sheila's a lucky woman. You guys are the best and I love you.

TGB: Ya know, she wrote me a note this morning saying the same thing, that she's a lucky woman. 36 years. Well, I love ya, can you be here in about 20 min so I can set you a plate?

Jenn: I wish I could!

TGB: I'm serious now, I love ya and you call us for anything. We're here for you. Love you! Gotta go, plates are rattling and my stomach's growling!

Next time you're in a Cracker Barrel gettin' your chicken and dumplin' fix, be sure to pick up a copy of "Christmas with T.Graham Brown". You can also order it via their website, Amazon and iTunes. It makes a great gift to go under the tree. Music is the gift that never fails to give back. Check out the video below and hear T talk about "Run Run Rudolf."