TEGAN MARIE RINGS IN THE MOST WONDERFUL TIME OF THE YEAR WITH NEW HOLIDAY SINGLE “JUST ANOTHER NIGHT,” AVAILABLE NOW 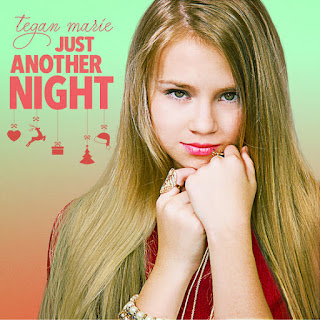 Tegan Marie is celebrating the most wonderful time of the year with the release of her holiday single “Just Another Night” to all digital retailers today (12/2). Exclusively premiering on People Country yesterday (12/1), the song features the gifted 13-year-old singer’s stunning vocals and festive yet thoughtful lyrics about being with loved ones over the holidays. The original song was produced by David Delazyn and Chaz Michan - who make up The Fliptones (Jason Derulo) - and written by Delazyn, Michan and Hayley Gene Penner (Magic!).

“If your loved ones weren’t by your side during the holidays it would feel just like a regular day,” shared Tegan. “Christmas is by far my favorite time of the year. There is nothing like gathering around the Christmas tree, drinking hot chocolate and celebrating with your family. And, I know how lucky I am to be able to do that.”

Adding to the excitement, the music video for “Just Another Night” debuts today (12/2), which features clips from a visit to Radio Disney’s Los Angeles studio and her recent performance atop the Radio Disney / Radio Disney Country float at the Magnificent Mile Lights Festival Tree-Lighting Parade in Chicago.

A native of Flint, MI, the burgeoning singer-songwriter released her catchy single, “Lucky Me,” last spring with 100% of the proceeds going to children directly affected by the water crisis in her hometown. She stunned listeners this summer when she released her breathtaking rendition of Florida Georgia Line’s #1 smash hit “H.O.L.Y.,” which garnered 17 million plus views on Facebook and led to high-profile media looks including her national morning TV debut on ABC’s Good Morning America and US Weekly's “Buzzzz-o-Meter” feature.  She also caught the attention of the U.S. Women’s Soccer Team who invited her to perform the national anthem at their last home game prior to the Olympics. After debuting on the Radio Disney Country stage at the CMA Music Festival in June, Tegan has played shows with country stars Hunter Hayes, Thomas Rhett, Cam and Chris Stapleton.

Discovered by girl platform Sweety High, Tegan first shared her videos on their site when she was only 7 years old. Her sweet, clean vocals and sensitive interpretations now have girls (and moms) across the nation clamoring for more. In their words, she is “your new obsession.” Tegan has received over 60 million video views in the last 120 days with unprecedented social engagement.

“Just Another Night” is available on iTunes, Apple Music and Spotify.

For more information on Tegan Marie, visit teganmarie.com.
Posted by LovinLyrics at 2:01 PM