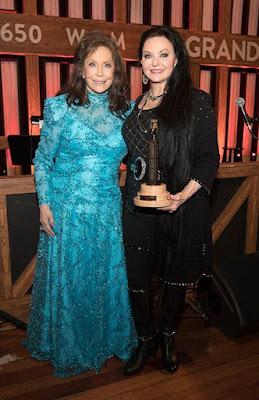 Grammy®-winning songstress Crystal Gayle was inducted into the Grand Ole Opry® this evening at the Ryman Auditorium by her sister and Opry legend Loretta Lynn. Gayle made her Opry debut 50 years ago on the Ryman stage, singing the country classic “Ribbon of Darkness” at age 16. She had been publicly invited to join the Opry by Opry member Carrie Underwood in November.

“We’ve been together a long time, honey. And we’ve never had a fight,” Lynn said. “It was the greatest moment of my life when they made me a member of the Grand Ole Opry in 1962. I know she is just as happy as I was then.” “Being a member of the Opry is just incredible,” Gayle beamed. “It’s really hard to comprehend. I have felt like a part of the Opry for all these years. Now, I’m official.”

Grammy-nominated duo Dailey & Vincent is set to be formally inducted into the Opry on Saturday, March 11.

Posted by LovinLyrics at 1:06 PM