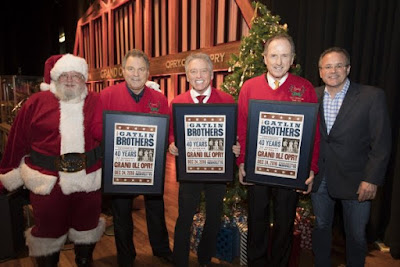 On Christmas Eve, Larry Gatlin & the Gatlin Brothers celebrated 40 years as members of the Grand Ole Opry.  The Opry presented Larry, Steve and Rudy with commemorative Hatch Show Prints as well as personalized Christmas sweaters with each brothers' name and embroidery reading, "Opry Member since 1976."

For more than 60 years, the close family harmonies of Larry Gatlin & the Gatlin Brothers have given the trio a signature sound that led to country classics like "All The Gold In California" and "Houston (Means I'm One Day Closer To You)."  The brothers won a GRAMMY® for their 1976 breakthrough hit, "Broken Lady," and reached #1 with "I Just Wish You Were Someone I Love" soon after.  Along with five career nominations for the ACM Vocal Group, the Gatlin Brothers picked up three 1979 trophies – Single of the Year ("All The Gold In California"), Album of the Year (Straight Ahead) and Male Vocalist of the Year for Larry Gatlin.  Larry has written songs that were later recorded by Elvis Presley, Glen Campbell, Barbra Streisand, Johnny Cash, Kris Kristofferson, Charlie Rich, Dottie West and more.  The brothers' latest album, The Gospel According to Gatlin, is available now from Curb Records.

For more information on Larry Gatlin and the Gatlin Brothers, visit www.gatlinbrothers.com
Posted by LovinLyrics at 8:46 AM