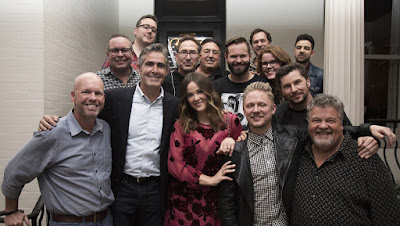 
BIG LOUD RECORDS is pleased to announce the signing of edgy young singer-songwriter JILLIAN JACQUELINE to its growing roster of next-generation talent.

A native of Chester Springs, Pennsylvania, Jacqueline was road-mentored by country icon Kenny Rogers and has written and recorded alongside legends like Vince Gill and Richard Marx. Combining a progressive mindset and a distinctive, effortless voice with new-school, no-holds-barred storytelling, she joins a label home that already features breakout success Chris Lane and rising star Morgan Wallen.

Making her official Big Loud Records debut at Nashville’s historic BELCOURT THEATRE on Thursday (3/16), Jacqueline – a vibrant, green-eyed artistic force – stunned the crowd with a sizzling EPK and a slinky performance of the feisty tracks “Hate Me,” “God Bless This Mess,” “Til I See You Around,” and “Sad Girls.” She accepted roses and a standing ovation from the packed house of early supporters, then chatted with a crowd in the theater’s lobby.

Her first project will be unlike anything else in country music – a full-on audio/visual experience. Produced by Tofer Brown, Jacqueline’s first batch of tunes will begin rolling out in April alongside full-length videos to accompany each one. More details will be available soon.

"I am so overwhelmed by all the love I felt last night, to have all the people in Nashville that have supported me on this long, crazy road, in one room, was really magical," exclaimed Jacqueline. "I'm SO proud and grateful to my Big Loud team for giving my music a home, and I can't wait to share more with you."

“Jillian is truly one of those voices and talents that comes along very rarely,” says Big Loud Records’ President Clay Hunnicutt. “This is truly a ‘passion project’ from day one and we are thrilled to be lucky enough to work together on great music and more. Jillian is a woman we will be talking about for a long time, and one day we’ll say ‘do you remember the first time you heard Jillian Jacqueline?’ This is going to be special in a lot of ways!”

View additional photos from the event via Getty Images here.

Jacqueline has been invited to co-write with some of the biggest hitmakers in Music City, including Craig Wiseman, Shane McAnally, Natalie Hemby, Rodney Clawson, Chris Tompkins, Lori McKenna and more.

Dubbed a “dazzling chanteuse-wordsmith” by Rolling Stone in 2016, Jacqueline’s tender 2014 single “Overdue” (featuring Vince Gill) has been streamed over 2.5 million times on Spotify. “Prime,” her young-at-heart lifestyle manifesto released in 2016, has already gathered almost 1.5 million streams. Her “Prime” music video premiered on Nylon.com and also aired in regular rotation on CMT, who have named Jacqueline as one of their Next Women of Country for 2017.

For more about Jillian Jacqueline, visit www.jillianjacqueline.com.
Posted by LovinLyrics at 5:08 PM