Hosted by Cody Alan, event will bring together artists and celebrities
for a night supporting at-risk youth 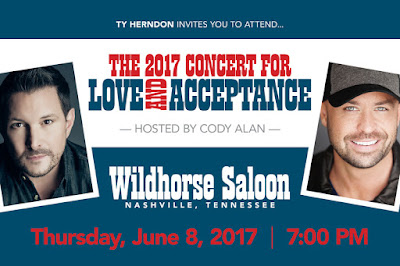 Award-winning recording artist Ty Herndon has confirmed his second Concert for Love & Acceptance, a benefit supporting at-risk youth, for June 8th at Wildhorse Saloon (120 2nd Ave. North) in Nashville, Tenn. The concert will bring together musicians and celebrities for a night of entertainment and a good cause. The doors will open at 6 p.m. with the show starting at 7:30 p.m.

“I’m very excited to announce our 2nd Concert For Love & Acceptance. We had so much fun the first time that we had to do it again,” comments Ty Herndon, “We have some amazing artists and celebrities that are coming together to celebrate love and acceptance in Nashville, and we want to be a shining beacon to the rest of this world we are living in.”

Cody Alan, host of CMT's Hot 20 Countdown, producer of iHeartRadio's CMT After Midnite and CMT Radio Live, will serve as host for the event that will feature performances from renowned artists who will be announced in the coming weeks.

Grammy-nominated and Dove Award winning artist Ty Herndon created the Concert for Love & Acceptance, when his 20th anniversary fan club party turned into a coalition of artists gathering in support of Nashville’s at-risk youth. The driving force behind the benefit is Herndon’s desire to foster positive cultural change and encourage Nashville’s youth to live to their fullest potential.

In November of 2014, Ty Herndon became the first major male country artist to publicly come out as gay. Shortly after, he made history when he hosted this first-of-its-kind event, The Concert for Love & Acceptance. The event received national attention from Boston Globe, Rolling Stone, Entertainment Tonight, People Magazine and more. A philanthropist at heart, Herndon has also donated his time to organizations such as the Trevor Project, Make A Wish, St. Jude, GLAAD, HRC and Feed the Children.

For more information on Concert for Love & Acceptance or to purchase tickets, please visit www.TyHerndon.com.
Posted by LovinLyrics at 2:04 PM