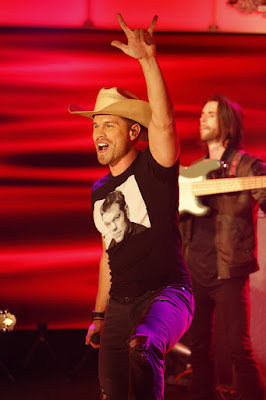 The charming small town Tullahoma, Tennessee, native had the captivated live studio audience grooving to the laid-back, modern country pulse with a classic theme – which is all about the simple “truth” in true love.

And when Lynch with a big ol’ grin sang, “She likes my T-shirt,” he hilariously exposed his own T-shirt under his sleek leather jacket which featured a black-and-white photo of host Jimmy Kimmel’s longtime nemesis, actor Matt Damon. Pre-performance, Kimmel quipped, “Here with a song ‘Small Town Boy’ and a very bad T-shirt…Dustin Lynch!”

Lynch is back on the road supporting FLORIDA GEORGIA LINE’s explosive DIG YOUR ROOTS TOUR 2017 until the run wraps May 6 in Quebec, Canada. Then he'll join BRAD PAISLEY on May 18 to kick off the summer leg of his 2017 world tour in Saratoga Springs, New York.

For more information, visit DustinLynchMusic.com.
Posted by LovinLyrics at 2:40 PM