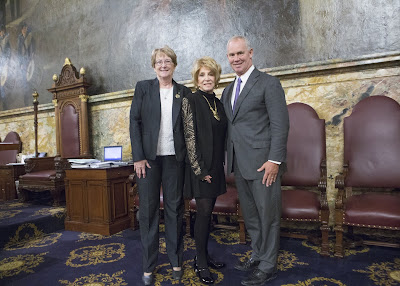 "Never have I been more proud of my heritage than I was today. It is my hope that I will always represent Pennsylvania in a manner that would make them proud of their native daughter, and I thank them for this distinguished honor." Seely said.

Born in Titusville, Crawford County, and raised on a farm outside Townville, Seely became the first Pennsylvania native to become an Opry member on Sept. 16, 1967, and also the first woman to regularly host Opry segments.

Seely recently released her new album WRITTEN IN SONG, which topped the list of CMT’s ‘New Albums in the New Year,’ The Boot’s ‘Most Anticipated Albums’ and continues to receive lovely reviews:


She is “Miss Country Soul,” a beloved member of the Grand Ole Opry, a country icon and a Pennsylvania hit-maker well before Taylor Swift was born… Seely’s latest album WRITTEN IN SONG features 14 updated timeless classics she has written and co-written.
-CMT.com, Lauren Tingle


Jeannie Seely proves that her songs and her voice are as great as they ever were on this fantastic new album.
-Roughstock, Matt Bjorke


The country music singer has written songs for numerous artists and it’s refreshing to hear her voice along with her very own take and production on these songs. These are, after all, her songs to sing and she certainly has the vocal prowess to do so!
-Backstage Axxess, Dee Haley


Jeannie Seely soars on her new album, Written in Song. "Miss Country Soul" is back stronger than ever. There is a variety on her latest musical effort. It garners an A rating.
-Digital Journal, Markos Papadatos