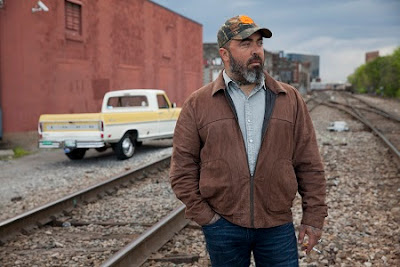 Aaron Lewis will debut a brand new song called "Folded Flag" on Hallmark's Home & Family show on April 25. The powerful and heartfelt song pays tribute to all those men and women who serve our country.

"It all started with the haunting melody, and the picture of two young lovers," Lewis said of the song. "Bringing to mind the realities, and sacrifices that our veterans live everyday. Many of us have The Folded Flag in common, and I hope that we can all honor our veterans and their families, forever."

The self-proclaimed “Northern Redneck” and Staind frontman achieved critical and commercial success with SINNER earning him the #1 position on the Top 200 Albums, Top Country Albums and Top Digital Albums Charts upon release.

SINNER was also one of Billboard’s 10 Best Country Albums of 2016. "The no-holds-barred honesty of tracks such as “I Lost It All” and “Mama” were some of the finest writing from a male artist this year." – Billboard

The Boot raves, “Aaron Lewis shows a surprising understanding and respect for country music with his latest album, SINNER. Drawing from his childhood influences of listening to country music in his grandfather's car, SINNER shows Aaron's abilities as a singer, songwriter, musician and stylist. SINNER might just be the record that propels Aaron to a permanent place in country music.” Maverick Magazine’s Eric Dahl concurs, “Aaron Lewis brings a raw honesty to his songs on the new album SINNER that Country Music radio hasn’t heard in a long time. The imagery of the lyrics sucks you in, but his mournful voice and guitar keep you!”