Appears On WSM-AM, Plus Premieres On One Country & The Boot To Promote
Much-Anticipated Project 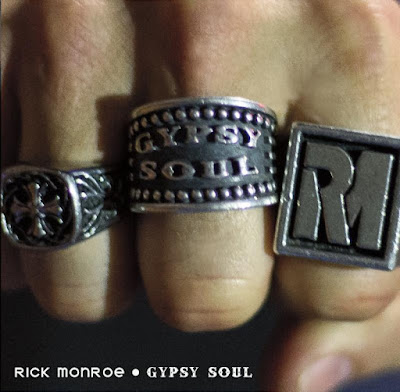 Singer/songwriter Rick Monroe has been hard at work for the last several months promoting the May 12 release of his new EP, GYPSY SOUL.  Now, with the clock ticking to Friday's official release, Monroe is doubling down.  One Country will premiere the disc's title track today, and fans can listen live tomorrow, May 9, when Rick visits with Devon O'Day at 5:15 p.m. CT on WSM-AM's "Nashville Today" show.  On Wednesday, The Boot will premiere "Rage On," the Outlaw/Southern Gospel sensation from the six-track EP; The Alternate Root will feature the gritty number in their Top 10 Songs of the Week on Saturday.  Sean Giovanni (John Rich, Clint Black, Big & Rich) produced five tracks for the project, while renowned engineer/producer JD Shuff (Collin Raye, CeCe Wynans) helmed one.  GYPSY SOUL can pre-ordered now at iTunes.

"A great introduction to Monroe's skills as a singer and songwriter. It's a journey that visits just about every facet of his musical soul, and with sumptuous results."
- Greg Victor, ParcBench

The EP's groove-based first single, "This Side Of You," is already resonating with radio and listeners alike.  The track is currently sitting at #52 on the MusicRow CountryBreakout™ Chart, and holds the #60 position on the BILLBOARD Indicator Chart.  Fans can enjoy the track on Spotify.

Rick's live shows are also garnering attention, and promoters are applauding his talents:


"WOW!  People were talking about this for weeks after his performance.  Not an empty seat in the house.  Oh, did I mention, he was up against Miranda Lambert who was in concert down the road?"
- HonkyTonk Saloon / Ladson, SC

"Rick Monroe put on an awesome show; he had the crowd rocking from the first song till the last."
- Ben Owenby, Owner of Johnny and June's / Winston-Salem, NC

"Rick is a favorite at the Mad Boar.  A class act, one of the best we have ever had, can't say enough about him as an artist and a person."
- Julius L. Wilson, Director of Hospitality / Mad Boar and River Landing / Wallace, NC

In addition to performances and appearances at CMA Music Festival 2017, Rick's upcoming shows include: