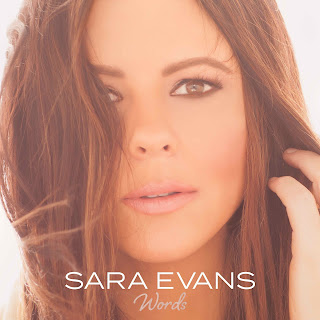 Days after Country Music star and entrepreneur SARA EVANS announced the launch of her own record label – Born To Fly Records – the multi-platinum entertainer has revealed additional details about her highly-anticipated forthcoming album. The ACM Female Vocalist of the Year divulged today that her brand new album Words will release on July 21. Fourteen separate female songwriters, including powerhouses Ashley Monroe, Caitlyn Smith, Hillary Lindsey, Hillary Scott, Liz Hengber, Sonya Isaacs and of course Sara herself, contribute their words to the stunning, upcoming record.

“When I’m listening to a song, it’s the lyrics and the stories they tell that matter most to me,” said Sara. “Not only is ‘Words’ the title to one of the songs on my album but in listening to new music for the record, I was always looking for lyrics that moved me and expressed a powerful range of emotions. Women are natural storytellers and I’m proud to have so many amazing female songwriters represented on this record.”

Beginning today, limited-edition, fan packages are available for pre-order at http://smarturl.it/SEStore. Pricing starts at $11.99 and include a variety of bundles ranging from a signed CD or vinyl version of Words, a Sara Evans t-shirt, journal, mug or acoustic guitar.

Additional details about Sara’s new album Words will be revealed in the coming weeks. Fans can catch up with Sara on the road with dates booked throughout the year. For more details, check out saraevans.com.
Posted by LovinLyrics at 3:08 PM