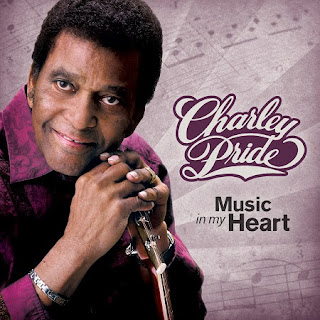 Country icon Charley Pride is back with his brand new album, Music In My Heart, which is available now. The project serves as Pride’s first album in more than six years, and is released via Music City Records. The highly anticipated project features 13 new studio recordings that were produced by acclaimed singer/songwriter Billy Yates. Fans can purchase Music In My Heart on Amazon, iTunes and wherever music is sold.

Pride has continued to turn heads with the new collection. In addition to a recent feature by Billboard, Pride will also be included in spotlight feature interviews with the Associated Press, Huffington Post, Goldmine Magazine and more. Media is raving, with Billboard saying “Charley Pride's vocals are just as soothing to the soul as a glass of Granny's tea and those pair of shoes that you always find yourself drawn to.....just like returning to the well.”

The trailblazing singer will be celebrating street week by traveling to New York City to accept the Lifetime Achievement Award from The Recording Academy® at their 2017 Special Merit Awards. The awards ceremony and live tribute concert will be held on Tuesday, July 11, at The Beacon Theatre, where Pride will also be performing. While in the area, Pride will stop by CBS Evening News, ABC News' 'Live From The Couch', Access Hollywood, Fox News Radio, SiriusXM, CNBC SquawkBox and more.

Pride will also appear at the Summer NAMM Show in Nashville July 15. The multi-Grammy® award winner will be performing songs from his brand new album, along with many of the 36 chart-topping hits that propelled him to superstardom and an induction into the Country Music Hall of Fame.

Music In My Heart Track Listing:

Posted by LovinLyrics at 2:14 PM