Watch Him Perform "For Her" Now On Taste Of Country 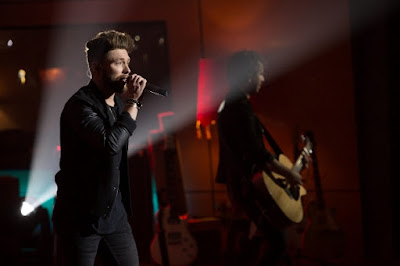 Tune in to the AT&T* AUDIENCE Network concert special "Chris Lane" airing on Friday, September 29, at 9:00 p.m. ET/PT via DIRECTV Ch 239, AT&T U-verse Ch 1114 and on-demand through DIRECTV NOW. Chris Lane sits down with series host Ted Stryker for an in depth interview. Watch the trailer for the show (HERE) and Chris Lane's "My Story" interview (HERE).

Watch and share a "First Look" from the show as Chris Lane delivers a full-song performance of his gold-certified, #1 (iTunes Country Chart) single "For Her," up now via Taste Of Country.

AUDIENCE Network's multiple series of original and exclusive performances give music fans an intimate view of music's most influential artists today. The network collaborates directly with musicians to create a unique show from their perspective.

Chris Lane continues to turn heads with gold-certified, Top 10 tender tune of devotion "For Her," catapulting his second single to #1 on the iTunes Top Country Songs chart following a special performance on season 21 of ABC's The Bachelor. The follow-up to his #1, gold-certified smash debut "Fix"--claiming over 37 million streams on Spotify and 8.5 million views on Vevo--both songs are featured on his Big Loud Records debut album, Girl Problems, produced by superstar studio ace Joey Moi (Florida Georgia Line). Gaining recognition for his jaw-dropping falsetto vocals mixed with a smooth R&B-meets-country vibe, Lane was named one of MusicRow Magazine's 2017 Next Big Thing Artists and scored his first-ever nominations for the 2017 iHeartRadio Music Awards (Best New Country Artist) and the ACM Awards (New Male Vocalist of the Year). Lane's profile is on the rise thanks to his national TV appearances on Late Night With Seth Meyers and Conanplus shout-outs from massive industry names like Bryan Cranston (Breaking Bad), Selena Gomez, Florida Georgia Line, Lucy Hale, Daughtry and more. The Kernersville, NC, native has landed coveted opening slots on tours with Garth Brooks, Dustin Lynch, Rascal Flatts, and Tim McGraw and Faith Hill's long-awaited Soul2Soul Tour. He is currently out on Florida Georgia Line's nationwide The Smooth Tour 2017, and will embark on his first-ever headlining run-the Take Me Back Home Tour beginning this fall.

Catch Chris Lane on tour in the following cities: