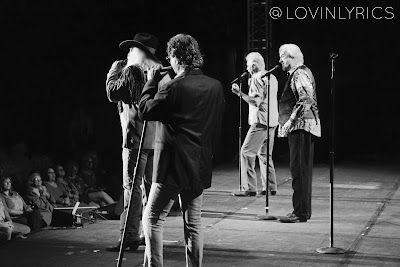 One word usually comes to mind when one mentions The Oak Ridge Boys - legends. I mean they've accomplished so much in the past 40+ years: surviving multiple lineup changes, winning every award a musical group can win, performing in Russia, multiple #1 hits including "Elvira", one of the most played songs of 1981, sold over 40 MILLION albums, became members of the Grand Ole Opry and the Country Music Hall of Fame and so many other things I can't even begin to name. They've done it all. Legend is described as "an extremely famous person or notorious person, especially in a particular field". Sure, that describes them pretty spot on but there is another word that I believe defines them more accurately - heroes. The definition of hero is "a person noted for acts of fine quality and greatly admired." I think that defines Joe Bonsall, Duane Allen, Richard Sterban and William Lee Golden perfectly, at least to me and a million other people who love them. Aside from their music which has affected so many people, their generosity and kindness has made even more of an impression. They've give back in so many ways over the years through charity work, events and causes as well as personally with their time and wisdom. Ask any longtime fan what stands out most about any of these men and I can almost guarantee that "Elvira" won't be the first answer you get. You'll hear recollections of personal connection and friendship. You'll hear stories of ways they've given back, how they've helped up and coming artists and songwriters, how they've gone out of their way to help anyone who needed it, even an independent music promoter as myself. I can speak from experience as to their kindness and caring. I can also attest that it's more than music that drives The Oak Ridge Boys to keep going after 40 years, although they do love what they do. It's the love of performing, sharing moments with friends and fans, and giving them something to take with them that lasts long after the last note is sung. Just look at the expressions throughout the audience at any ORB show if you want to see it for yourself, They leave lasting memories, they leave hearts full and smiles on faces. 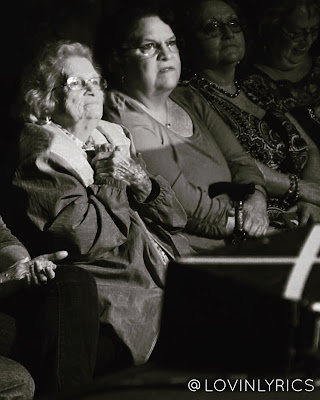 The Oak Ridge Boys brought their Celebration 2017 Tour to the Winston Salem, NC Fairgrounds last weekend and performed to an excited crowd that came from all corners of the country to sing along with four of the finest voices in country music. The building was abuzz with conversations of past memories of their first Oaks show, fans saying they had caught a glimpse of one or more of the Oaks behind the security gate by the buses, people talking about their favorite songs, and the anticipation of those who held a hard to get meet and greet pass about finally meeting the Boys and getting a chance to say hello. There were already lines at the merchandise table of those waiting to purchase their latest music, books and shirts. You could feel the energy in the air and the show hadn't even started yet. One of the best things about pre-show is the time you get to spend with other friends and fans. I was lucky during this show to spend quailty time with some friends who also made the journey to the show - David Britt, a singer/songwriter from Charlotte, NC whom I've been good friends online with for several years, Tammie Davis, a singer/songwriter from Clemmons, NC and her husband and daughter, Brian Carpenter from HLE Radio, and I was able to have time with my best friend of 32 years, Dana.

The night started with a strong performance by NC artist, Tiffany Ashton. Tiffany is one of Renegade Radio. Nashville's New Faces of Country 2017. She won the 2016 Carolina Music Video of the Year Award for "The Only Guy", the 2015 Hollywood Music in Media Country Artist of the Year Award, 2015 Charlotte Music's Songwriter of the Year Award and Women in Country Award. She got the crowd ready with great, high energy set.

The Oaks took the stage around 8pm, backed by the incredible Mighty Oaks Band. Now, before I dive right into the show, I gotta take a minute to give props to the band. The Mighty Oaks are some of music's most talented musicians. They are first class in their playing and first class in who they are. You really won't find a better group of guys or a harder working group of people..

The band consists of:

Rex Wiseman (fiddle, steel, mandolin, guitar) who joined in 2006 and previously played with John Conlee, Rhonda Vincent and other. Rex is also an amazing solo performer, releasing his own bluegrass CD in 2017, "Welcome Home", that includes vocals from the Oaks, Rhonda Vincent, Jimmy Fortune and more. You can pick up the CD at any Oaks show or online.

Ron Fairchild (keyboards) is the son of the Tommy Fairchild who played piano for the group from 1957-1972 and has a 20 year connection with the Oaks. Ronnie is somewhat the "class clown" always laughing and doing something funny during each show.

Roger Eaton (lead guitar) joined the band in 2014. Roger brings years of experience with him having played with Barbara Mandrell, Lorrie Morgan, Joe Diffie and Tanya Tucker. Roger also does production for other artists. He is truly one of the finest guitar players to ever grace a stage.

Scotty Simpson (bass guitar) came on board having performed with Tanya Tucker, Pam Tillis, Kevin Sharp and Travis Tritt. He has been hard at work putting together his first solo album and writing his own music. The CD is set to release soon. One noticeable thing about him, you'll always see a smile on his face and he'll always put one on yours.

Jeffrey Douglas (guitar and dobro) has been with the Oaks as a band tech since 1995 and was later promoted to stage manager. In 1999, he stepped in to play guitar and in 2004, added dobro to his resume. He's always on stage next to Rex and who knows what the two of them are gonna do. Just keep an eye on the left side of the stage.

Austin Curcuruto (drums) recently replaced David Northrop in 2017 when David left the band to tour with Boz Skaggs. Austin is the youngest member of the band, but that doesn't mean he's green when it comes to experience. In 2010, he was named runner up for Up and Coming Drummer by Modern Drummer and he's toured with artists such as Craig Campbell, Bo Bice, Krystal Keith and more. He also works with other artists in his off road time.

So, back to the show ... what can I say other than it was everything I expected, and like every show, even more. The Oak Ridge Boys are like a fine wine, they really do seem to get better with age. They perform from right from their hearts to ours. Their performance is proof that when you love what you're doing, it's no longer a job. The joy of performing is more than obvious by the banter, the smiles, the laughter and the years of friendship. It's what keeps these men going, performing over 100 shows a year, most being sellout performances. The crowd started roaring and the applause was almost deafening when the familiar announcement came over the speaker announcing "The Legendary Oak Ridge Boys". Joe, Duane, Richard and William Lee hit the stage and the fun began. They had fans on their feet and singing along with every word of favorites including "Dream On", "Sail Away", "Leaving Louisiana in the Broad Daylight", "Trying to Love Two Women", "Touch a Hand, Make a Friend", "American Made", "Come on In", "Thank God for Kids", "Y'all Come Back Saloon", "Time Has Made a Change in Me", and and more. They also performed a few of their favorite southern gospel tunes. The set lasted at least 90 minutes if not more, with no breaks. The band sounded amazing. They wrapped up the night with a rousing sing along of "Elvira" and "Bobbie Sue" with everyone standing and cheering, hoping for an encore. The crowd loved it and even after they left the stage, fans had the familiar concert "afterglow" about them, talking about their favorite part of the show and how great the show was as a whole. I always love walking through a crowd just as a show ends and hearing the excitement, the stories, the "I wish it wasn't over yets". You can't help but see how much the Oaks are admired and appreciated and how much they've positively impacted their fans ... isn't that really more definitive of heroes than simply legends?

There are a few more dates through the fall of the Celebration Tour before the Christmas tour kicks off in the winter. If they're in your area, buy a ticket and experience one of the best shows you'll ever have the chance to be a part of, not just see. Check their website for ticket info - www.oakridgeboys.com.

P.S. - If you happen to see Darrick Kinslow (tour manager), Jon  Mir (Operations Manager/Photographer/Jack of All Trades), Darrell Bowling (bus driver and security), Marko Hunt (Sound), Mike Campbell (Merchandise), Zeke (monitors) or any other members of the Oaks crew, take a minute to thank them for what they do. A lot of work goes into each and every show and these guys are every part as important as the Oaks and band members in making each show a success and deserve appreciation.
Posted by LovinLyrics at 1:33 PM