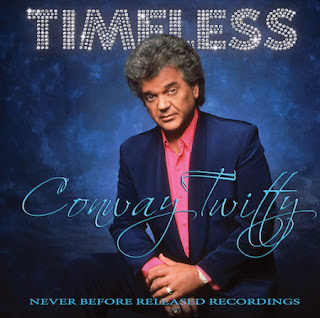 Conway Twitty, one of America's most-loved performers of all-time with 55 No. 1 one hits to his credit (second only to George Strait) created a musical legacy that continues to endure and thrive almost a quarter-century after his passing in 1993. Country Rewind Records has released TIMELESS, a collection of never before heard recordings from Twitty himself. The new record is now available on vinyl and it’s the first vinyl release of Conway music since the 1991 record Even Now. The vinyl is available on ConwayTwitty.com and Amazon.

The songs on Timeless haven't been heard since their original airing in 1972, included in a series of musical recordings from top artists at the time as part of a United States recruitment program. Singers such as Dolly Parton, George Jones, and Waylon Jennings would record fifteen-minute performances that would be distributed to over 2,000 radio stations throughout the world intended for commercial release. Tom Gramuglia of Country Rewind Records, says that he can’t wait for fans to hear these recordings - which put the recorded genius of Conway Twitty on full display for all to hear.

“These recordings were long forgotten and few people who knew of their existence. They’ve never before been made commercially available to the public and I truly felt like this music needed to be shared with long-time traditional fans, and heard by our younger generation of Millennials who have a flavor and inkling for country music recording artists that made American country music great.”


"Timeless is a truly special piece of Country Music history that reminds listeners of the exquisite musical legacy of an artist who was rightfully called "The Best Friend A Song Ever Had." The title of the album says it all. Conway Twitty was - is - and always will be 'Timeless.'"
- Chuck Dauphin, Billboard Magazine

The music on Timeless is a mixture of many of the songs that made Conway Twitty a household name, such as his signature song from 1970, “Hello Darlin,” as well as a pair of deeper Twitty cuts that are no less historic or powerful - “The Image Of Me” and “Next In Line” (his first top ten and number one hits, respectively) from 1968. His band, the Twitty Birds - featuring steel guitar wizard John “Buttermilk” Hughey, bassist “Big Joe” Lewis, and drummer Tommy “Pork Chop” Markham - are featured on Timeless, as well as new musical accompaniment produced by Twitty’s daughter and son-in-law, Joni and John Wesley Ryles. Joni - who performed with her father on the 1975 classic “Don’t Cry Joni” - says this music is something that Twitty’s loyal following will want to add to their collection:

“When I heard it, I was blown away. I couldn't be prouder of Dad's performance, and the Twitty Birds did such a great job. Every Conway Twitty fan needs to hear this. My family could not be more pleased to celebrate his life in music with this compilation of treasures.” Ryles says that her family has been pleased to see that his music continues to warrant praise and attention from many of today’s biggest stars - something for which she is grateful.

While the sessions that comprise Timeless weren’t the typical Decca recording session with Owen Bradley producing, these tracks - cut at the studio of former Elvis Presley band member Scotty Moore - drip with as much perfection as anything he cut at Bradley’s Barn. It wasn't like a typical session where everything was perfected,” explained Ryles. “But, these songs are an incredible gift, and Daddy was sounding as incredible as he ever did. These recordings make my heart smile, and I think his fans will feel the same way.”

Posted by LovinLyrics at 9:42 AM