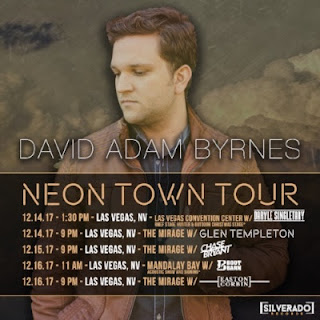 David Adam Byrnes will kick off his Neon Town Tour in Las Vegas starting on December 14. This is the second consecutive year the traditional country singer will begin a nationwide tour during the National Finals Rodeo in Las Vegas. Fans of Byrnes can catch him throughout the week, performing and signing autographs.

Most recently the Arkansas native released an original Christmas song, “All Year For” which was featured on Silverado Records’ Christmas compilation album, A Very Nashville Christmas. Byrnes signed with the rapidly growing independent label earlier this year, joining a roster that includes legendary Country artist Joe Diffie. The Neon Town Tour will continue into 2018 as Byrnes works on his third studio album.