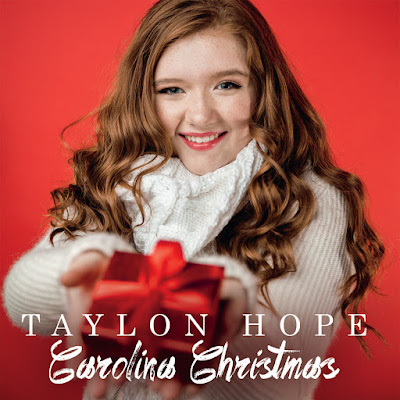 As an official introduction to the holiday recording project, Taylon released the title track (“Carolina Christmas”*) to country radio via PlayMpe/12-7-17. Taylon delivers a wistful, romantic holiday ballad as a fond recollection of the place she calls “home,” and true to her namesake, “Carolina Christmas” shimmers with the whimsical magic the hopeful season brings. Complemented by flowy, graceful lyrics, Taylon’s angelic vocals dance like a ballerina to delicate piano instrumentation.

“There’s just something about the holidays that make us all recall the place where we grew up--like my hometown; some of my favorite holiday memories stem from this special place,” said twelve-year-old singer/songwriter Taylon Hope. “North Carolina is snuggled in mountains, blanketed in snow and surrounded by pine trees. The storyline celebrates faith, family and the true meaning of Christmas--Jesus. It was in my heart to write a song about the ‘reason for the season,’ the magical moments and the memories from my hometown, and I’m so grateful to Corey and Timothy for helping me to paint the picture.”

The release of CAROLINA CHRISTMAS, and the title track, is in keeping with the momentum of Taylon Hope’s flourishing country music career. Taylon’s most recent self-penned country single, “Showin’ My Roots” (produced by Kent Wells) charted on the MusicRow Breakout chart (June 2016). Inspired by Dolly Parton, Carrie Underwood, Keith Urban, Martina McBride, Vince Gill and Kelsea Ballerini, the young vocalist’s talents have been recognized by various music industry organizations. Taylon was named “Vocalist of the Year, Junior Division” (The Josie Show Music Awards/2016); she was presented the “Youth in Music” award at the Inspirational Country Music Awards (2016) and this year, Taylon was decorated as “Artist of the Year, Junior Division” at 2017 Josie Show Music Awards. The live entertainer has performed nearly 80 dates in 2017 taking the stages at the Grand Ole Opry, MerleFest, the Lyric Theater in Lexington, KY, the Schermerhorn Symphony Center and under the spotlight at various notable Music City writers rooms and infamous visitor destinations (including the Bluebird Café, Listening Room Café, the Nashville Palace and the Texas Troubadour Theatre). A sought-after opening act, Taylon has performed before Suzy Bogguss, Ned Ledoux, T. Graham Brown, Jamie O'Neal, Red Roots and Adam Crabb; she was also tapped to make a special appearance at The Ralph Stanley Tribute (October 2017). Taylon is currently in the studio (with Kent Wells at the helm once again) putting the finishing touches on her next CD project with plans to release in early 2018.

The track will be available via all major digital retail and streaming outlets (Amazon/iTunes/Pandora/Rhapsody/Spotify) on 12/11/2017; digital retail distribution services will be provided by Ed Gertler, Digital Delivery Services.