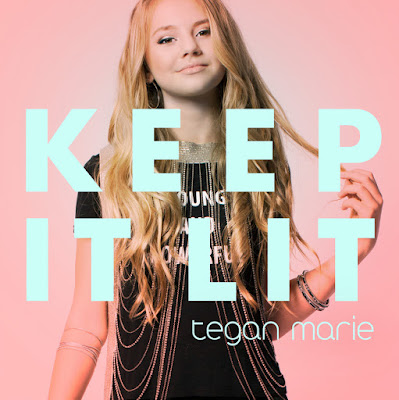 Rising country sensation Tegan Marie welcomes 2018 with the release of her brand new song – and debut for Warner Music Nashville – “Keep It Lit” on January 19. The track, which showcases her acclaimed vocal chops, will initially be available for digital download and on streaming services.

Discovered by girls’ media platform Sweety High, Tegan signed to Warner Music Nashville last summer – 13 at the time – making her the youngest female in 45 years to ink a major Country deal. HuffPost also took notice of the young star's talent naming her to its 10 Country Artists To Watch In 2018 list while critics and industry executives have given early praise:


“Tegan Marie is primed to be country music’s first Gen Z star... Between her natural talent and the powerhouse team behind her (hitmakers Scott Hendricks and Nathan Chapman, plus Gen Z media gurus Sweety High), don’t be surprised if Tegan Marie is a breakout country star sooner than later.”
– HuffPost

“[Tegan] Marie has the personality and voice of a future star, and she definitely has the always hard-to-define ‘It.’”
– USA Today

“‘Tegan is just a thousand-watt light bulb in a dark room.
When you look for ‘it,’ the definition is Tegan.’"
– Phil Guerini (GM, Radio Disney; VP of Music Strategy, Disney Channel)
– Detroit Free Press

Co-written by Tegan, “Keep It Lit” is produced by acclaimed hitmaker and WMN’s VP of A&R, Scott Hendricks (with 70 #1 hits for artists including Blake Shelton and Alan Jackson).

“I’ve never signed an artist as young as Tegan,” shared Hendricks. “I hear lots of talented young female singers, but Tegan had that extra ‘thing’ I’ve only seen from stars that have made it to the top. She lights up any room she walks into and her singing was far beyond her years. The first time I recorded her I was ‘jaw dropped’ by her technical abilities and professional approach.”

The fun, up-tempo tune, named after an expression popular with Tegan’s generation (Gen Z) “lit,” celebrates happiness, good vibes and lightheartedness. It’s also her rallying cry to inspire people across the country to make 2018 a year of positivity and hopefulness.

Tegan is starting 2018 on a high note. During her history-making year she also made waves across the Internet. In 2017 alone, she garnered 100 million video views, had 270 million social engagements and gained two million social followers. Other highlights included making her debut at the Grand Ole Opry and collaborating with Hendricks and multi-GRAMMY winner Nathan Chapman (Taylor Swift, Martina McBride).

With a larger-than-life voice, Tegan Marie was discovered when her father uploaded videos of her cover songs to Gen Z girls’ site, Sweety High. Featured as a Radio Disney Country artist, she has since catapulted into the national spotlight with several high-profile media performances and appearances including ABC’s Good Morning America and PBS’ star-studded special Smokey Robinson: The Gershwin Prize and the 2017 Radio Disney Music Awards. First releasing the song “Lucky Me” to benefit the children affected by the water crisis in her hometown of Detroit, the momentum continued with her breathtaking rendition of Florida Georgia Line’s #1 hit song, “H.O.L.Y.,” racking up over 17 million views on Facebook alone. To date, Tegan has amassed over 75 million video views and receives over five million engagements online each month. She’s also had a string of coveted opening slots, sharing the stage with artists such as Cam, Hunter Hayes and Kelsea Ballerini. This past spring Tegan appeared at CMA Music Festival on the Radio Disney Country stage and at California’s popular Country music festival Stagecoach to great acclaim. Critics praised her performance with USA Today hailing, “[Tegan] Marie has the personality and the voice of a future star, and she definitely has the always hard-to-define ‘It.’” Last summer she partnered with Pepsi MidAmerica for a six-city tour and is currently working on her debut album for Warner Music Nashville.

For more information on Tegan Marie, visit teganmarie.com.
Posted by LovinLyrics at 1:12 PM