SYLVIA'S "SECOND BLOOM - THE HITS RE-IMAGINED" SET FOR JUNE 8 RELEASE #NOBODY WANTS TO MISS THIS ... SEE WHAT I DID THERE? 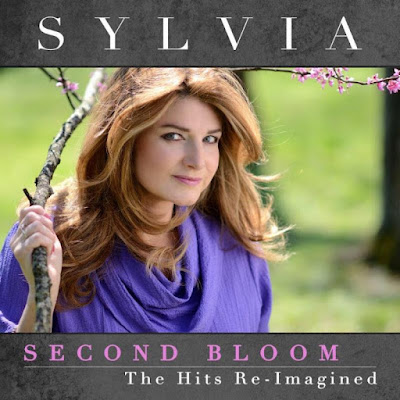 Academy of Country Music Female Vocalist Of the Year, Grammy nominee and multi-million selling '80s icon Sylvia is set to release her newest CD, SECOND BLOOM - The Hits Re-Imagined, on Red Pony Records June 8. The album is available for pre-order now from iTunes and CD Baby.  Fans who order digitally will receive "Like Nothing Ever Happened" as an instant gratification track. Those who prefer a disc, will have their album autographed by Sylvia and receive an email containing instructions on how to obtain their "grat track" download. The project's first single, a reprise of Sylvia's signature Country/Pop smash, "Nobody," has just been released to radio and programmers can download the track HERE.

SECOND BLOOM includes 10 all-new interpretations of her # 1 / Top 10 hits from the RCA years (1979 to 1987). The Indiana-born songstress became known for her unique "Prairie Music" sound, with hits like "Drifter" and "Tumbleweed," and crossed over to the Pop market with the unforgettable "Nobody," which sold an astounding two million copies, spent 52 weeks on the Billboard charts, and was named BMI's Song of the Year. Sylvia's new version of "Sweet Yesterday" brings her life experience to bare with an even more poignant and meditative take on the song. "Cry Just A Little Bit" is updated with strings and drums with an infectious shuffle feel, while "Fallin' In Love" takes a decidedly Bluegrass spin that swings joyfully along as Sylvia's voice and Andy Leftwich's fiddle take turns in the spotlight. The disc closes with "You Can't Go Back Home," a song that was not previously released as a single, but serves as an allegory for Sylvia's approach to recording SECOND BLOOM. The song metaphorically reflects her intention to not re-record the songs note-for-note but to give them a fresh rendering. Sylvia's interpretation of the song is subtle, reflective, and memorable. This is Sylvia at her most powerful.

The synthesizer-laden, Country/Pop sound of the past is replaced throughout with a cleaner, more streamlined and organic approach. Tin whistles and strings are paired, fiddle and classical guitar meet - and in each joining they form a magical backdrop for Sylvia's clear and soulful vocals. While much of her formative music is defined by a certain era and genre, the songs themselves are bound only by the artist's imagination. And Sylvia has imagination to spare. She and longtime collaborator John Mock modernized instrumentation and voicing and, in some cases, departed dramatically from the original production values. Consistent, however, are the signature licks that fans will recognize and Sylvia's genuine reverence for these tunes that form her artistic lineage.
"My desire was to bring my music from the '80s into alignment with the music I'm creating today," she notes.  "I wanted to breathe new life into the songs as if I was recording them for the first time while still honoring their musical identity. I believe the spirit of the music is just as relevant today as it was when these songs first bloomed."
On SECOND BLOOM, Sylvia bridges the gap, bringing these hits to life in a new way while paying homage to the music that made her a star. This is an album that is by turns introspective and carefree, evocative and joyful. Longtime fans will remember why they fell in love with Sylvia's music, while new admirers will be captivated by the purity of her voice and musical convictions.
TRACK LISTING

Get Social With Sylvia: