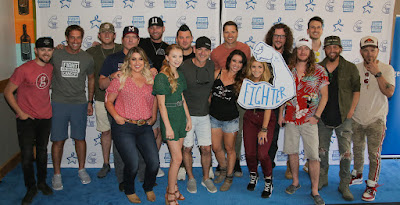 Fans bid for the chance to play against the stars in tournament fashion, with Craig Campbell ultimately taking home first place.

Tonight (6/6), Campbell will follow up at City Winery with the One Million Strong Dinner gala, where the total amount raised from this year’s event will be officially revealed. Having lost his father to colorectal cancer at 11 years old, the dedicated family man is one of FIGHT CRC’s national spokespersons, and has previously raised more than $300,000 for the cause.

But with Nashville’s beloved CMA Music Fest getting underway, Campbell’s big week is just getting started.

Tomorrow, June 7, Campbell will celebrate Throwback Thursday at his old haunt The Stage on Nashville’s Lower Broadway – the same honky tonk where he was discovered years earlier. Starting at 2 p.m. CT, the traditionally-minded star will deliver a set of ‘90s Country favorites for a show billed as Karaoke With Craig. Then at 9 p.m. CT he’ll bring out his own hits with a primetime set on the massive Cracker Barrel Country Roads Stage at Ascend Amphitheater.

On Friday, June 8, Campbell will release his highly-anticipated SEE YOU TRY EP – seven diverse tracks featuring his flirtatious chart-riser “See You Try” and two versions of the critically-acclaimed “Outskirts of Heaven.”

And finally on Sunday, June 10, he’ll finish up as the last artist to perform on the attention grabbing Chevy Riverfront Stage. That hit-filled set will get underway at 4:45 p.m. CT, and all of Campbell’s CMA Music Fest concert appearances are free and open to the public.

The week marks the beginning of a big summer for the fan favorite, who plans to headline select dates across North America following a standout 2017 which included Luke Bryan’s HUNTIN', FISHIN' AND LOVIN' EVERY DAY Tour.

Posted by LovinLyrics at 4:11 PM