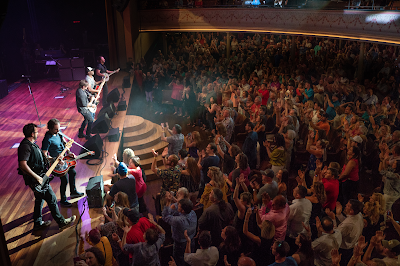 "As a parent I can’t imagine the emotional toll hearing your child has cancer takes, not to mention the financial stress,” said Rucker. “The support families with a child facing life-threating illness receive from St. Jude is just incredible. I’m proud to support St. Jude and I’m so grateful to all our friends who came out and donated their time to be on the show."

With thousands descending on Music City for 2018’s CMA Fest, the benefit concert has become an unofficial kick off to the week’s festivities. For its second year at the historic Ryman Auditorium, Rucker welcomed surprise guests Patrick Davis, Edwin McCain, A.J. McClean of the Backstreet Boys and Brad Paisley, along with stars Trace Adkins, Lauren Alaina, Bobby Bones, Ashley McBryde and Rachel Wammack and more than 2,400 fans to the sold-out event.

Alaina was followed by iHeartMedia’s award-winning nationally syndicated radio host, Bobby Bones. He had the crowd in hysterics with his comical Bobby Bones and The Raging Idiots tune "Chick-Fil-A (...But It's Sunday)." He was then joined on stage by Rucker for a rousing cover of the Beastie Boys’ classic “Fight for Your Right.”

To the delight of attendees, “Darius and Friends” has become known for its surprise guests and this year was no exception. The first surprise of the evening came with Rucker introducing the Backstreet Boys’ A.J. McLean to roaring screams of approval. McClean launched into Backstreet Boys’ hit “I Want It That Way” with support from the crowd singing every word of the chorus.

Rucker then returned for the second of three sets throughout the evening; this time performing his hits “Hands On Me” and “Radio” before introducing RCA Nashville newcomer Rachel Wammack. The soulful songstress wowed the crowd with “No Love” and “Damage” off her debut EP.

Rucker described the evening’s next performer as one of his “favorite voices in country music and just an all-round great dude” before introducing country star and actor Trace Adkins, who delivered a crowd-pleasing performance of his hits “Ladies Love Country Boys” and “Just Fishin’.” “In my opinion there is no better cause than St. Jude,” Adkins said. “Children are innocent and they don’t deserve anything bad that happens to them. If something bad happens to me, I probably did something to deserve it,” Adkins added, drawing laughs form the crowd.

Rucker then returned with hits “Homegrown Honey” and "If I Told You" before introducing Edwin McCain as the night’s second surprise guest, who took the stage performing his hit “I’ll Be.” McCain’s soaring vocals could hardly be heard over the audience singing along to every word. He followed up the hit song with covers of Peter Gabriel’s “In Your Eyes” and Seal’s “Crazy.”

Rucker returned to join both McCain and fellow South Carolina singer/songwriter Patrick Davis for a funky cover of Bill Wither’s “Use Me” before bringing out breakout country singer/songwriter Ashley McBryde, who immediately captured the rapt crowd’s attention with Top-30-and-climbing single “Little Dive Bar in Dahlonega.”

“Gosh it is good to be here at the Ryman. It never gets old being here,” she shared before playing her infectious “American Scandal” off debut album Girl Going Nowhere. McBryde told stories from her time at St. Jude last December and detailed the patients she met there, before declaring “Country Music has been there over 40 years for St. Jude and we will be there every single time.” An emotional highlight of the evening followed, with her mesmerizing take on Cyndi Lauper’s hit “Time After Time” drawing a standing ovation from the audience.

“He’s not my friend, he’s not my buddy, he’s my brother,” Rucker said before introducing the final performer and surprise guest, country music superstar Brad Paisley. Rucker joined Paisley for his first number and struck a somber note with a duet of Paisley’s hit “Letter To Me,” although the notoriously comical Paisley couldn't resist getting a few jokes in throughout the song, teasing Rucker with "You dated Bridget too?"

Rucker and Paisley have a long history as duet partners, having toured together in 2010. Paisley also invited Rucker to join the Opry nearly six years ago. They’ve also teamed up several times over the years for different charitable causes including a fundraiser hosted by Paisley's wife Kimberly Williams-Paisley just the night before.

Paisley then performed fan favorite “Ticks” before Rucker returned to join him for a boisterous duet of Paisley’s hit “Alcohol” and bringing the crowd to their feet with a rocking cover of Prince classic “Purple Rain.”

The crowd was not ready for the night to end and Rucker obliged with an encore of his Hootie & the Blowfish hit, “I Only Want to Be with You.”

The evening ended, as has become tradition, with a performance of Rucker’s hit “Wagon Wheel,” with Adkins and McBryde returning to the stage to join Rucker and the crowd for a raucous singalong.

Rucker, a longtime philanthropist over his more than two decades as a hit-maker and singer-songwriter in the music industry, was recently named the ACM Gary Haber Lifting Lives Award winner for his devotion to improving lives through the power of music. He made a commitment to support St. Jude Children’s Research Hospital® after touring the campus in 2008. St. Jude Children’s Research Hospital® is leading the way the world understands, treats and defeats childhood cancer and other life-threatening diseases. Unlike any other hospital, the majority of funding for St. Jude comes from individual contributions. Events like this help ensure families never receive a bill from St. Jude for treatment, travel, housing or food – because all a family should worry about is helping their child live.

Rucker recently achieved his ninth career No. 1 on the country charts with “For The First Time” and will co-headline the Summer Plays On Tour this summer with Lady Antebellum before heading overseas to the United Kingdom for a string of shows this fall.