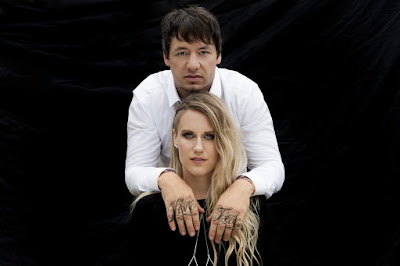 American Young recently performed at the Chengdu Auto Music Festival in China for a sold-out crowd of 20K fans. The duo, made up of Jon Stone and Kristy Osmunson, was the only foreign act invited to perform at this year’s festival. This is a major feat for an American act to have an opportunity to perform at an event of this caliber.

Following their sold-out performance at Chengdu, American Young performed in Beijing at a banquet that was hosted in their honor. In attendance were Chinese artists, television executives, music producers and film directors, who took interest in collaborating with the duo. American Young’s positive impression earned them an invitation to return to China this fall.

“We couldn’t be more humbled and grateful for the opportunity to share communities, art, music, language, and friends with such an amazing country. Cheng Du is the big sister city to Nashville, while Beijing is our big brother! We are so blessed to be able to experience such a rich and vibrant Chinese culture through its music,” Said Osmunson.

The duo’s performance and appearance in China is an encouraging example of the growing cultural and arts exchange between the United States and China. There are 1.4 billion people in China eager to learn and appreciate American music, arts, and culture.

Formal relationships in the states have already begun with the Chinese entertainment industry. Todd Thomas of Curb Records/Brave World Agency has plans to bring other Curb Recording acts to China to begin establishing relationships of their own. During American Young’s visit, China’s Kelly Yu and Kevin Kong hosted the duo and assisted in expanding the cultural exchange between the United States and China. Additionally, a relationship has been formed in the U.S. with Trisha Lum and Nickie Lum Davis of TriNick Entertainment, Marvin Baker of Cafe Nashville and BGTV Direct who will continue to bring American music of all genres like Blue Grass, R&B, Pop, and Hip Hop to China.

American Young continues to have widespread international success in selling out venues throughout various countries around the world. In the last two years, the duo has toured all over the United Kingdom, Switzerland, Norway, Netherlands, Germany, Mexico, Belgium, and Denmark. The Curb Recording artists are looking forward to releasing new music both nationally and internationally in the near future.