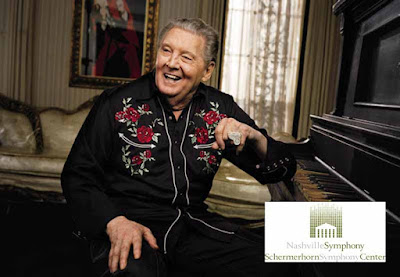 Rock ‘n’ roll’s original wild-man and country music stylist, Jerry Lee Lewis, will return to Nashville for the first time since 2014 at Schermerhorn Symphony Center on Dec. 10. Tickets are available for presale here and will go on sale to the general public on August 10 at 10 a.m.

“We are honored that Jerry Lee Lewis has chosen the Schermerhorn for his triumphant return to Music City,” said Alan D. Valentine, Symphony president & CEO. “His appearance promises to be one of the highlights of our entire season lineup, and we are thrilled to add ‘The Killer’ — one of the true legends of American music — to the long list of musical icons who have graced our stage.”

Few artists in music history can boast a résumé as impressive as that of “The Killer,” now in his seventh decade of an unrivaled career that includes numerous GRAMMY® Awards, induction into the Rock and Roll Hall of Fame’s inaugural class, the Recording Academy’s Lifetime Achievement Award, and an unparalleled impact on countless rock and country artists who have followed in his footsteps.