HAVE YOU TUNED INTO CASH CREEK? 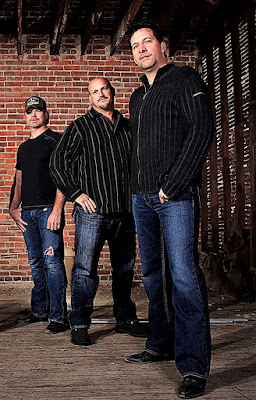 Cash Creek may be a new name to most, however if you're a concert goin' country music fan, you've seen most of their faces standing behind some of country's biggest names night after night. Cash Creek is simply a group of outstanding musicians, who happen to also be longtime friends, that decided to come together and do their own thing and create a distinctive sound that is unique in today's market. When you turn on a song by Cash Creek, you won't hear autotune, overly produced electronic instrumentation, or anything like that here. What you will hear is simply the perfect blend of authentic God given vocal and instrumental talent from guys who love what they do and are pretty great at doing it. Courage, hard work, sacrifice, determination, commitment, toughness, heart, talent, guts are what this band is made of. They're gonna be able to look right at God at the end of their time and honestly say, "You know what, You gave us this ability and we used it the best we could to give back." Zac Brown once said "Talent alone gets you nowhere. You really have to have the grit, and you gotta have a love for people." I think he was talking about these guys because that is exactly who these four men are. They love what they do, they do it for the right reasons and they love people and those people love them right back.

Cash Creek started out as Silver Creek in the small "don't blink or you'll miss it" California town of Pope Valley. These longtime friends threw together a band and began playing small events around town and the Pope Valley Farm Center. Before long, the band's name caught the west coast wind and Silver Creek became one of the most requested bands for almost every west coast stage you can think of. Word spread pretty quickly among label and industry reps, phones starting ringing and the buzz was all over Nashville. The guys headed to Music City to do some networking and performing. This was where Silver Creek ended and Cash Creek was born. Two of the members decided it was time to pack up and move east to Music City, one of those members being Kimo Forrest. Kimo made the move and set up his own garage studio and began playing around town, eventually working with artists including John Michael Montgomery, Trace Adkins and his current regular gig as the guitarist for the legendary super group, Alabama. It was while on tour with John Michael Montgomery that he established a friendship with fiddle/mandolin player Steve Stokes. The music these two created together was something special, a sound quite unlike anything in today's modern country and with the addition of two more of Kimo's close friends and musicians from Pope Valley, drummer James Blaylock and bass player Monty DeVita, Cash Creek was on their way.

Since moving to Nashville, Cash Creek has released 6 albums and 3 charted radio singles. Singles released to radio include "Even Angels Have Bad Days", "Worth a Woman", "One Wave at a Time", and "The Hard Way." Cash Creek was also honored with nominations for 2 consecutive ICMA Awards for Mainstream Country Duo. Unfortunately they did not take home the win, but this is just a stepping stone on the path God set them on and that path only leads to big things. These guys didn't come together by chance, they came together by design. Steve Stokes recently left the band for personal reasons but Kimo, Monty and James are still going stronger than ever. Their latest single, "Make Your Momma Proud" released in late 2017 and has been a recurrent entry on The Iceman's New Artist Top 40 Country Chart and keeps gaining ground. "The Hard Way: Final Chapter" EP was released on December 15, 2017 and getting some great feedback from listeners on social media.

"Loving all these songs. Been on repeat for most this week!!! ❤️❤️"

"You have us under your spell and we love it!"

" Listening to [At The] She Don't Give a Damn Cafe. This really shows the versatility in their voices and of course the instrumentals are superb, as always."

Their song, "Trouble in Love" was awarded the Josie Award for Song of the Year 2018. They are also featured on the new "Why Not Me" CD collaboration by Alabama's Jeff Cooke and cultural icon, William Shatner. The CD also features guest vocals from Neal McCoy and Home Free.

The guys are currently on their "The Hard Way" Tour and are covering both the east and west coasts. You can catch them along with special guests Kaylee Starr and Jody Medford on select dates. Can't wait to see what 2019 holds for these amazing musicians. Big things are on the way!

Connect with Cash Creek online at www.cashcreekband.com and get social with the guys on Twitter at @cashcreek, Facebook and Instagram! Give 'em a chance, trust me, they're worth your time. God willing, this Creek's gonna rise!

Get your copy of their latest EP, "The Hard Way: Final Chapter"and any of their other music on iTunes, at CD Baby and stream on Spotify. Be sure to leave a review and let them know how you like it!