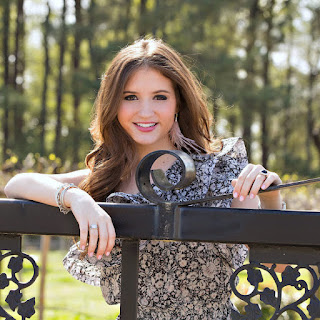 North Carolina-born country artist, Danielle Johnson is one of the format’s youngest and brightest new faces. Johnson is kicking off the Fall season with the release of her self-titled debut EP that is, in Johnson’s words, produced to ‘bring joy into the lives of her listeners.’ The EP, released through Danielle Johnson Music, is now available through all streaming platforms and digital retailers.

Delivering her music with a wide range of influences encompassing pop-appeal and rootsy authenticity, Johnson is ready to make her mark. The project, produced by Grammy award-winning, Guy Eckstine, features five tracks which were all co-written by Johnson including, the previously released focal track, “Let It Be You.” The EP came to life through many writing sessions and was inspired by real feelings, experiences, and living in the moment. Over the last four years, Johnson has spent her time recording and co-writing with artists including Phil Galdston, Jennifer Denmark, Mike Dekle, Dave Brainard, JP Williams, Michael Hunter Ochs, and Keesy Timmer, among others.

“The writing process for this project was so much fun. Every song is very special to me and tells a story of its own. The EP takes you on a ride that’s full of twists and turns. I poured my heart and soul into this and I hope it brings joy to your life too," Said Johnson about the EP.

Prior to releasing music, the multi-talented artist has had experience acting in Broadway’s How The Grinch Stole Christmas, performing The National Anthem at NASCAR races including the Charlotte Motor Speedway and the Coca-Cola 600 among other events. Johnson is celebrating the release of her debut project with rehearsals for her string of dates in the Nashville area and upcoming US tour dates (soon to be announced). She is excited to share her new music and bring this EP to life on the road.

Johnson commented on her upcoming tour dates saying, “Having the opportunity to perform live is such an amazing gift. The stage is my home and I can't wait to see everyone and meet new friends on the road!”

2.“You're The One That Got Away” (Danielle Johnson, Mike Dekle)

3.“Let It Be You” (Danielle Johnson, Jennifer Denmark, Brianna Tyson)