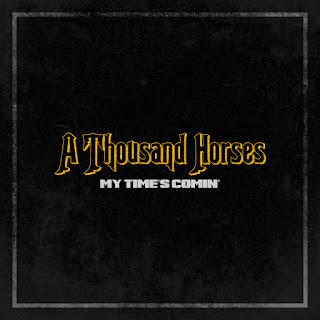 PLATINUM selling Country-rockers A THOUSAND HORSES are helping RAM TRUCKS put the pedal to the metal in 2019, unveiling their new heavy-duty lineup with the band’s powerful track, “My Time’s Comin’.”

Filled with tough-as-nails determination and led by frontman Michael Hobby’s signature vocals, “My Time’s Comin’” was used to reveal Ram’s new heavy-duty models at Monday’s (1/14) 2019 North American International Auto Show, and will be promoted through a creative collaboration with RAM TRUCKS throughout 2019.

RAM TRUCKS are the longest lasting heavy duty trucks on the road, and the #2 heavy duty pickup brand in the world. Currently enjoying an explosion of excitement as the fastest growing truck brand in North America, the all-new 2019 Ram Heavy Duty is the most powerful heavy duty pickup in history, offering drivers an unheard of 1,000 pound-feet of torque.

Featuring Hobby alongside Bill Satcher (lead guitar), Zach Brown (guitar), and Graham Deloach (bass), A THOUSAND HORSES released BRIDGES in the summer of 2017 – a six-track EP which included the working-man’s anthem, “Preachin’ To the Choir.” They spent early 2018 firing up arenas around the country as direct support on KID ROCK’S AMERICAN ROCK N ROLL TOUR, and in December, “My Time’s Comin’” was first heard in CBS Network’s “One Shining Moment” coverage of the National Finals Rodeo.