IT'S A GREAT DAY TO BE ALIVE” FOR HOME FREE 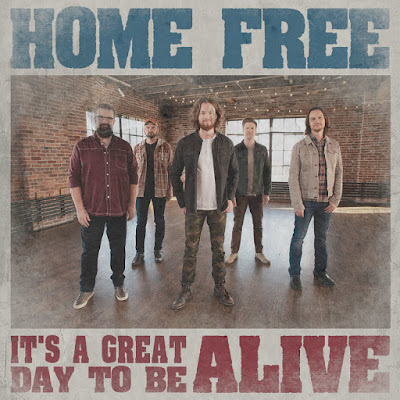 “It's A Great Day To Be Alive” for all-vocal Country entertainers HOME FREE as they release their latest spin on a Country classic. This time embracing Travis Tritt’s celebratory anthem, the feel-good tune is available now to stream and download.

High tenor Austin Brown leads the breezy recording, as well as the music video, which was captured at the start of winter in Peoria, IL. “It's A Great Day To Be Alive” was a special part of the VIP setlist during the seasoned road warriors’ fan club party each night on last year’s A COUNTRY CHRISTMAS TOUR, which later inspired them to release their own take.
WATCH THE VIDEO NOW
Next venturing between Canada, the States, and Australia, Home Free launches the final round of the TIMELESS WORLD TOUR next week. Tallying over 140 dates in total across more than 14 countries, the multi-year tour has added its final dates including Pueblo Memorial Hall in Pueblo, CO, on April 2, and Arkley Center for the Performing Arts in Eureka, CA, on April 16. Tickets for these stops go on sale Friday (2/8), with additional details here.

For more information on HOME FREE and the TIMELESS WORLD TOUR, visit www.homefreemusic.com
Posted by LovinLyrics at 3:36 PM