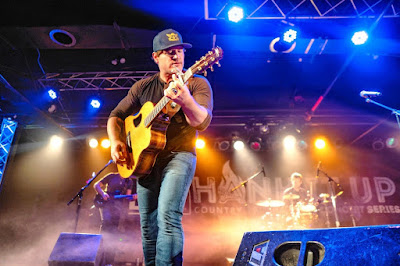 JERROD NIEMANN made his triumphant return to the road this weekend for the opening dates of his LIVE IN CONCERT: JERROD NIEMANN TALLBOYS AND SHORT STORIES headlining tour in Kansas City, MO (3/15) and Indianapolis, IN (3/16).

Niemann kicked off the first of many intimate tour stops with one goal in mind – to go back to his roots – and he did just that. Not only did both shows bring him to cities he hadn’t visited in several years, but they also took him back in time musically. Delivering a curated setlist, the prolific tunesmith led a sea of fans in rowdy sing-alongs of career favorites, which spanned over the last two decades and included everything from his #1 smash hits, “Lover, Lover” and “Drink to That All Night,” to his most recent patriotic release, “Old Glory.”

Keeping with the theme of revisiting where it all began, Niemann capped off each show by channeling his inner ‘80s Country star. The Liberal, KS, native paid homage to those who came before him by putting his own spin on iconic Country classics, including George Strait’s “All My Ex’s Live in Texas” and Alabama’s “Mountain Music” – tunes that helped mold him into the artist he is today.

For additional information on JERROD NIEMANN and his LIVE IN CONCERT: JERROD NIEMANN TALLBOYS AND SHORT STORIES headlining tour, please visit https://jerrodniemannofficial.com/ and reach out to him on Facebook, Twitter and Instagram.