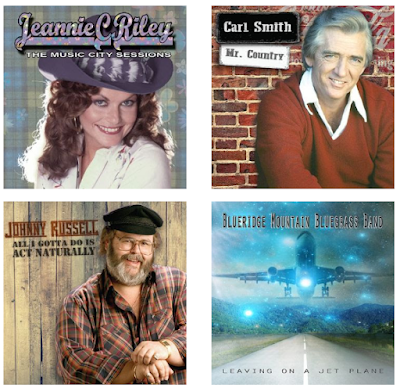 The first three releases consist of tracks that have not been heard for decades and never commercially released. The tracks were recorded in Nashville for broadcast use only and have been hidden from the public. The original authentic sound is respected and supplemented with updated instruments and background vocals, to bring the new recordings into the contemporary country era. These recordings are a follow up to Country Rewind Records previous releases of such greats as Conway Twitty, Waylon Jennings, Connie Smith and more which received great reviews by music critics everywhere.

Country Rewind Records has dedicated itself to bring classic country with this contemporary feel to not only the past country fans but also to the new country listeners.

The fourth release by the Blueridge Mountain Bluegrass Band maintains the Country Rewind tradition, even though it is a completely new recording. The classic sound of bluegrass blended with a contemporary touch. The New York portion of the recordings were created by the finest musicians from Upstate New York, who have won national championships including Chris Leske on banjo, David Bevins on dobro and Anthony Hannigan on mandolin. The Nashville portion of the recording features a veteran, John Frost from the Grand Ole Opry and a former band leader James Satterwhite, who played with Bill Monroe of the Nashville Bluegrass Band.

Country Girl
That's A No-No
Harper Valley P.T.A.
Crying Time
There Never Was A Time
Son Of A Preacher Man
Things Go Better With Love
Me And Bobby McGee
The Back Side Of Dallas
The Games People Play
Wish You Were Here
The Girl Most Lonely
Okie From Muskogee
Rollin' In My Sweet Baby's Arms

Johnny Russell  - “All You Gotta Do Is Act Naturally”
Song List:

Good Hearted Woman
She's In Love With A Rodeo Man
Red Necks, White Socks, and Blue Ribbon Beer
Johnny B. Goode
Catfish John
Act Naturally
I Can't Help It (If I'm Still In Love With You)
Making Plans
In A Mansion Stands My Love
She Burnt The Little Roadside Tavern Down
Jambalaya
The Baptism Of Jesse Taylor
Mr. And Mrs. Untrue
The World's Meanest Man

Order Johnny Russell “All You Gotta Do Is Act Naturally” on Amazon Music, iTunes and Google Play

Are You Teasing Me
If Teardrops Were Pennies
Deep Water
Loose Talk
Mr. Moon
Hey Joe
(When You Feel Like You're In Love) Don't Just Stand There
There Stands The Glass
I Love You Because
Foggy River
The Best Years Of Your Life
She Called Me Baby
I Over Looked An Orchid
The Way I Lose My Mind

The first three releases owe their existence to Country Rewind Records Thomas Gramuglia, who rescued the master tapes, and to John Jungklaus, who handled the original master tape transfers. These master tapes have been in storage for nearly 50 years. J. R. McNeely, Grammy Award Winner and Larry Marrs, who has performed with many great artists, including Willie Nelson, Waylon Jennings and Johnny Cash, produced the albums. The producers were honored and thrilled to be part of these historical projects. These long-forgotten recordings are now saved for prosperity.

John Kribbs an Upstate New York legend whose dream was to create the ultimate Bluegrass album is responsible for the fourth album.

Stay current with Country Rewind Records on their website countryrewindrecords.com
Posted by LovinLyrics at 4:49 PM