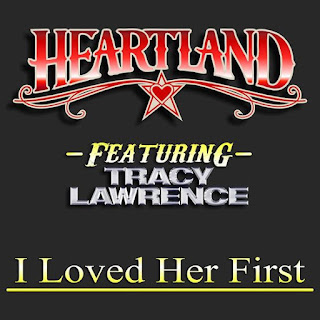 Heartland, the indie recording group that made an unprecedented splash in the country music scene more than a decade ago, has announced the re-release of the original tune that put the live entertainers on the country music map. Rekindling a one-of-a-kind chart-topper, and one of the world’s most-loved, and most-requested, wedding songs, the Alabama band celebrates the 2019 release of its new rendition of the hit song “I Loved Her First”.

Produced by hit songwriter Walt Aldridge "(There’s) No Getting Over Me" (Ronnie Milsap)/ "Till You’re Gone" (Barbara Mandrell)/ "Holding Her And Loving You" (Earl Thomas Conley)/ "Modern Day Bonnie And Clyde" (Travis Tritt)]), the brand new Nashville recording features performances by core band members Jason Albert, Charles Crawford and Keith West, with a special guest appearance by Tracy Lawrence. Set for a May 6, 2019 radio impact date, The new contemporary recording is the title track, and a sneak peek, of the band’s forthcoming 12-song CD project titled I LOVED HER FIRST: The Heart of Heartland anticipated in late June 2019.

Formed in 1994, Heartland released the original "I Loved Her First" track in June 2006 as its first single and title track from group’s debut studio album titled I LOVED HER FIRST. Written by Walt Aldridge and Elliott Park, the original track held its position the U.S. Billboard Hot Country Songs Chart for 16 consecutive weeks ultimately ranking as a No. 1 hit, was nominated for “Single Record Of The Year” by the Academy of Country Music and made the grade as a Billboard Top 100 tune for the year (2006).

A Billboard magazine review recognized the tune as a "beautifully written tearjerker that will hit home with dads everywhere who can't believe their little girls have grown up so soon.” (Deborah Evans Price)

Fast forward to 2015, driven by viral video play, the track re-entered the charts landing at No. 7 on the Billboard Hot Country Songs Chart nearly nine years later. The single has sold more than 1 million digital downloads to date, remains steadfast among the Top 100 Country Love Songs (https://tasteofcountry.com/top-100-country-love-songs) and is the sentimental “go-to” song played as the father-daughter dance at weddings across the globe. With no exception, the new recording is poised to carry on the tradition and unparalleled success story as Heartland’s swan song.
Posted by LovinLyrics at 3:35 PM