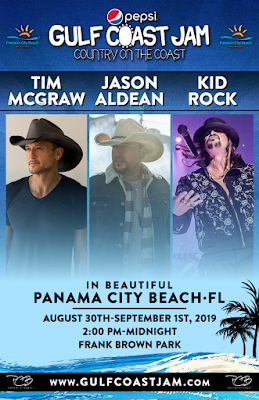 Producers of the Pepsi Gulf Coast Jam have revealed Tim McGraw, Jason Aldean and Kid Rock as the headliners of the 7th annual Country On The Coast festival, scheduled for August 30-September 1, 2019 at Frank Brown Park in beautiful Panama City Beach. The announcement was made concurrently by the massive lifestyle site 30A.com﻿ and www.VisitPanamaCityBeach.com. Tickets for the three-day event, which Billboard Magazine named one of "The 10 Best Country Music Festivals,” will be available beginning April 7, 2019.

“We are beyond excited about the headliners for our seventh year,” said Pepsi Gulf Coast Jam Executive Producer Rendy Lovelady. “These guys are proven hit makers and put on some of the best shows in the business.”

“Our PCB Entertainment team lives and works in Panama City Beach, and we were all affected in some way by hurricane Michael,” added Pepsi Gulf Coast Jam CEO Mark Sheldon.“The devastation was beyond words, and there is still an incredible need for assistance all across the panhandle.”

Parking passes for the Pepsi Gulf Coast Jam have traditionally been sold on site and always sell out. For the first time, parking passes are being offered online at www.GulfCoastJam.com. In addition, a limited number of Early Entry passes are also available for sale online.

Last year’s Pepsi Gulf Coast Jam drew a record 73,000 country fans from all 50 states and 14 foreign countries. General Admission tickets are currently $139. Military tickets are only $129 for all three days. That price will not increase, but quantities are limited. VIP Pit tickets are $429, Golden Circle are $699 and Side Stage tickets are currently $1,150. Skyboxes are sold out. Payment plans are also being offered, and details can be found at www.GulfCoastJam.com.