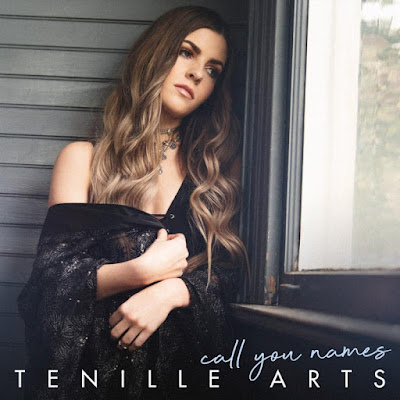 Hot on the heels of topping the Radio Disney Country Top 50 Chart with her “I Hate This” single, Reviver Records today released “Call You Names,” an incredibly personal song from Tenille Arts. Written by Tenille and James T. Slater (“High Cost of Living,” “In My Daughter’s Eyes,” “Unstoppable”) and produced by Alex Kline, the new single has special meaning for Tenille.

“I wrote ‘Call You Names’ about my mom and our relationship,” said Tenille. “It’s an apology for all of those teenage years. When we are at that age, we think we know everything and call our parents mean names. Then we grow up and realize how amazing they are, and the names we call change into beautiful names.”

Tenille shot a music video in Los Angeles for the new single last week before traveling to Las Vegas to perform a rousing set at Stoney’s Rockin' Country as part of the ACM Lifting Lives events leading up to Sunday’s ACM Awards. The video will begin airing later this month.

Born and raised in the small prairie town of Weyburn, Saskatchewan, Tenille Arts picked up the guitar and penned her first song at the age of 13 and has been performing across the US and Canada ever since. She made her first appearance on The Bachelor in January 2018 singing her original song “Moment of Weakness.” The performance resulted in a record deal with powerhouse indie label Reviver Records.
Tenille has released an EP and a full-length album, and her music has tallied over eight million streams. Noted music critic Tom Roland was so moved by her music that he has penned two full-page features in the Billboard Country Update. Music Row Magazine critic Robert K. Oermann called Tenille "Promising in the extreme." Streaming giant Pandora named her one of their new artists to watch, and CMT included her in their “Ten Must-See Indies You Need to Know,” a video discovery program that spotlights rising independent artists and established artists from independent labels. Rolling Stone named Tenille one of their “10 New Country Artists You Need To Know,” calling her “An edgy, Fearless-era Taylor Swift with crystalline vocals; ideal for hopeless romantics who are fire signs,” and PopCulture.com named her one of their "Country Artists to Watch in 2018."

Millions of viewers caught Tenille performing “I Hate This” on ABC’s top-rated The Bachelor in January. The song hit #1 on both the U.S. and Canadian iTunes Country Charts and #9 U.S. iTunes all-genre following the appearance.
.
To learn more about Tenille Arts go to www.tenillearts.com