SIRIUSXM OUTLAW COUNTRY TO AIR “I WANT TO GO HOME: AN OUTLAW TRIBUTE TO BOBBY BARE” IN CELEBRATION OF LEGEND’S 84TH BIRTHDAY 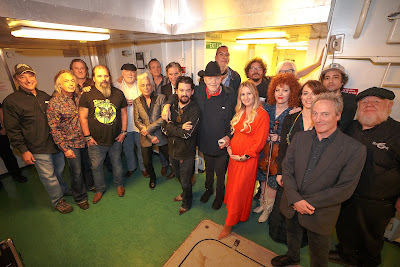 The Country Music Hall of Fame said it best when they opened the Outlaws and Armadillos exhibit in May of 2018, Bobby Bare originated “Outlaw Country” when he became the first artist of the era to gain control of his productions, leading to the likes of Willie, Waylon and the boys following suit. In celebration of the Country Music Hall of Famer’s 84th birthday on April 7 and over 60 years in the music business, SiriusXM’s Outlaw Country will air an all-star tribute concert recorded on the 4th annual Outlaw Country Cruise. The two-hour special will air on SiriusXM Outlaw Country, Channel 60 on Friday, April 5 at 8 p.m. ET, Saturday, April 6 at 10 p.m. ET and Sunday, April 7 at 12 p.m. ET and be available OnDemand through the SiriusXM app on smartphones and other connected devices, as well as online at siriusxm.com.

“I Want to Go Home: An Outlaw Tribute to Bobby Bare” was hosted by actor W. Earl Brown (Deadwood, The Highwaymen) and the two-hour concert features covers of songs associated with Bare performed by an all-star cast including Steve Earle & The Dukes (“New Cut Road”), Margo Price (“Tequila Sheila”), The Flatlanders - Joe Ely, Jimmie Dale Gilmore, Bruce Hancock (“500 Miles”), Shooter Jennings (“Quaaludes Again”), Mike Cooley of the Drive-By Truckers (“Dropkick Me Jesus”), John Doe (“The Streets of Baltimore”), Jim Lauderdale (“Miller’s Cave”), Dale Watson (“That's How I Got to Memphis”), Jesse Dayton with Doug Kershaw (“Marie Laveau”), Laura Cantrell (“Four Strong Winds”), Dallas Wayne (“Margie’s at the Lincoln Park Inn”) - fronting the ace Austin, TX-based band Heybale!, that backed many of the artists on the show - Bobby Bare Jr. (“Daddy What If”) and Bobby Bare himself closing the show with an all-hands-on-deck singalong of his signature hit “Detroit City” with its chorus “I want to go home.”

“Thanks to all of my friends for being part of this special moment for me, especially Jeremy Tepper and the teams at SiriusXM and the Outlaw Country Cruise. It’s been a good run and I’m excited for what’s to come,” said Bare.
Posted by LovinLyrics at 2:35 PM