“WE ALL COME TOGETHER” BENEFIT FOR JOHN BERRY AND MUSIC HEALTH ALLIANCE WAS FULL OF LOVE, EMOTIONS AND SURPRISES 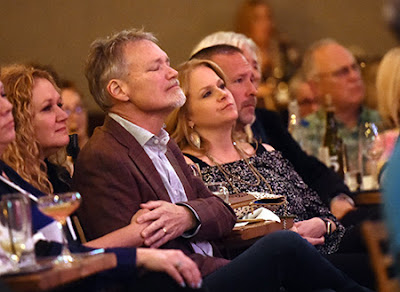 “We All Come Together" for John Berry and Music Health Alliance has been defined in many ways since the event held on April 23 at City Winery in Nashville, the words “We” and “Together” being the most important. The love and support shown to John Berry and his family was abundant for the sold out show not only by the fans, friends and family who filled the seats, but also everyone behind the scenes, as well as those who appeared on stage, including everyone who made donations and contributions to the event. Financial totals raised are expected to exceed $300K, although final tabulations are not available as of this release.

The benefit surpassed the traditional fundraising concert expectations by the incredible talent on hand who were backed by John’s band throughout the show. Hosted by WSM on-air personalities Chris Kulick, Devon O’Day and Mike Terry, along with Lorianne Crook and Charlie Chase of the Crook and Chase show, each sharing personal story after story about each artist who took the stage and engaging the audience with anticipation of the next performance.

Surprises and heartfelt special moments personal to John Berry and his wife Robin, as well as their family, were plentiful. John’s original band members, who toured with him at the height of his music career, together with John’s son, Caelan on drums and his wife Robin singing backup, joined his son, Sean, to play “Kiss Me In The Car,” bringing John to his feet, speechless and wiping tears as he tried to express his joy in seeing everyone on stage together.

A first time ever on stage collaboration performance by Trace Adkins, T. Graham Brown, Jimmy Fortune and Marty Raybon of “Workin’ On A Building,” had the crowd on their feet in awe. The song was originally recorded in 2012 as part of a fundraising effort to benefit the Mindanao Blessings International Philippines Orphanage Project.

Vince Gill, alone on the stage with just his guitar, delivered a touching performance of “Prove Me Wrong,” a song written by Gill and recorded by John Berry in 1995.

One of the most special moments came during the show when John took to the stage to sing his new single, “The Richest Man,” a heartfelt tribute to his father for teaching him the important things in life are friendships and values, not material things. "I may have written this song about my dad, but if my dad was here tonight, he would say I was the richest man he ever knew," expressed Berry as he introduced the song.

Berry followed this with “There Could Never Be Another Love,” with his wife Robin on stage next to him, sharing with those in attendance that he had 35 treatments for his cancer and she was right beside him for each and every one of them. As the song progressed, audience members brought to the stage, one by one, 35 long stemmed red roses to represent each cancer treatment. There was not a dry eye in the house.

Three unannounced and surprise guests stepped on stage with performances of their iconic songs. Rock and Roll Hall of Fame member, Jim Messina, had the crowd on their feet with his Loggins and Messina hit song, "If Your Momma Don't Dance," and Garth Brooks and Trisha Yearwood performed their legendary hit songs "Walk Away Joe" and "Friends in Low Places."

The evening ended with a sing-a-long of “We All Come Together,” a song recorded by John Berry and many of the artist’s who appeared throughout the concert to help the victims of Hurricane Harvey and Hurricane Irma. The original song was written by John Berry and Chuck Jones, but the lyrics were modified to fit this special occasion by Jones who came out and sang front and center along with many of the artists who performed during the event.

"It's so hard to find the words to convey how I feel about the "We All Come Together” Benefit, not only for me, but also for Music Health Alliance. Thank you is not big enough, incredible is not incredible enough and amazing is not amazing enough. In a million years I could not have imagined a night like Tuesday night. The artists, emcees, the photographers, the press, the Berry Lead team, the band, my friends, my family, the folks I met that night; it is almost too much to wrap my mind around. There was an enormous amount of love in the room. I am honored, humbled and grateful for the love shown to me and Robin. It is my hope that in the future as I heal and get back to playing music, that I can pass on that huge amount of love I received Tuesday night to others. Whether it be for folks in the music community, family, friends or fans, I want to give back what has been shown to me,” shares John Berry. “I am so happy that Music Health Alliance is a recipient of all the love shown Tuesday night. MHA has been there for my family for several years, providing answers and assistance for all our health insurance needs."

Artists who generously and graciously gave of their time and talent were revealed by media partner WSM Radio and live-streamed on The Heartland Network on the Cody, Coffee and Country show leading up to the event.

Email ThisBlogThis!Share to TwitterShare to FacebookShare to Pinterest
Labels: B! Noticed PR, benefit, john berry, Press Releases, We All Come Together for John Berry and Music Health Alliance