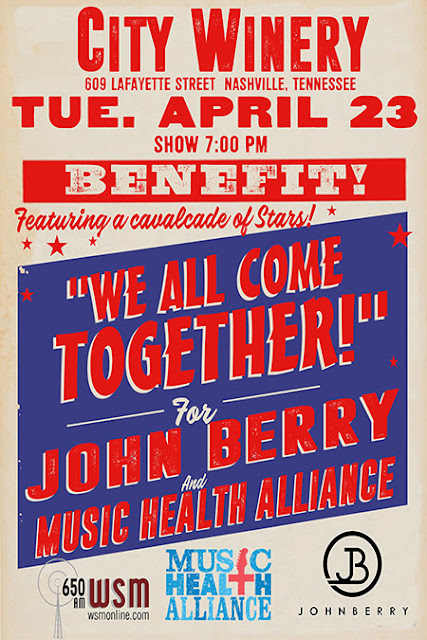 “We All Come Together" for John Berry and Music Health Alliance has announced two additional options to support the benefit concert on April 23rd. Contributions to the benefit can be made by texting the word DONATE to 678-666-5269 and following a URL link in the response. An online auction will go live on Thursday, April 18 at 9 AM CDT with new auction items added through the day of the benefit concert and once live can be viewed at accelevents.com/e/JBMHA.

WSM Radio on-air personalities Chris Kulick, Devon O’Day and Mike Terry along with Lorianne Crook and Charlie Chase of the Crook and Chase show will emcee the benefit concert.

The benefit concert scheduled for April 23 at City Winery has been organized to raise money to offset the medical expenses not covered by insurance for John Berry, who was diagnosed with throat cancer in January. A portion of the ticket sales will go to Music Health Alliance to fund assistance to others in the music community. Tickets can be purchased here.

"I am truly honored and humbled that so many of the Nashville music community have committed their time and talent to this event to help me and Music Health Alliance,” shared John Berry. “I am looking forward to personally thanking each one of them the night of April 23. I hope that I am able to maintain my composure and not be teary eyed the entire evening."

Artists who have stepped up to perform were revealed by media partner WSM Radio and live-streamed on The Heartland Network on the Cody, Coffee and Country show.

Email ThisBlogThis!Share to TwitterShare to FacebookShare to Pinterest
Labels: B! Noticed PR, benefit, john berry, Latest News, Performances and Events, Press Releases, We All Come Together for John Berry and Music Health Alliance