ERIN ENDERLIN POURS OVER THE ADDICTION OF LOVE ON NEW EP

“Chapter Two: I Can Be Your Whiskey” 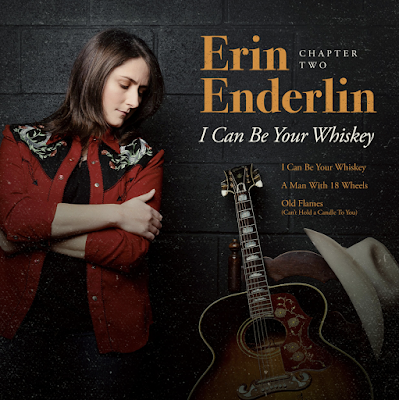 Singer/songwriter/storyteller Erin Enderlin lets the love do the talking with the release of her highly anticipated EP "Chapter Two: I Can Be Your Whiskey" (Friday, June 28). The title track and official music video were featured in Rolling Stone’s “10 Best Country Songs,” who also declared, “Enderlin serves up this barroom ballad about desperation, long nights, and quick fixes…offering up her love as the ultimate vice.”

In what can only be described as down-right addictive, the video chronicles the day in, day out routine of a man searching for a cure for his broken heart within the walls of a run down bar. But what he discovers is that the answers to some of his most heart-wrenching questions lie simply and perfectly in the eyes of the singer up on stage, watching him and singing her own love-quenching song.

Indeed, love and the pursuit is a theme that flows through the entirety of Chapter Two: I Can Be Your Whiskey, which also includes the craving “A Man with 18 Wheels” and the truth-bearing “Old Flames (Can’t Hold a Candle to You).”

The EP is a worthy follow-up to the already released Chapter One: Tonight I Don’t Give a Damn, which the Arkansas native released in April of this year. Chapter Three and Chapter Four are also slated for release beyond the end of the year.
Posted by LovinLyrics at 11:17 AM